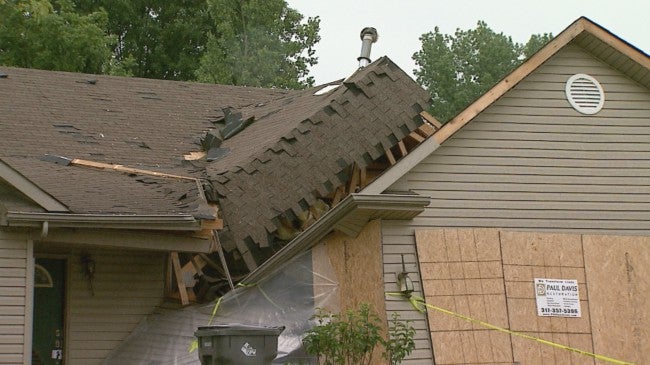 INDIANAPOLIS (WISH) — People in a southeast Indianapolis neighborhood are dealing with the aftermath of an EF-1 tornado that touched down near Southeastern Avenue and Irvington Avenue Saturday night.

The storm displaced the occupants of two homes in the neighborhood and inspectors deemed the homes unsafe for occupancy. Monday morning, the residents from the two homes said they were staying in hotels.

No one was hurt, but the storm damaged roofs and ripped parts of the siding off some houses.

She said the storm destroyed her gazebo, which laid in a pile in her backyard Monday.

Ennen said she watched the storm from her back window.

“The storm was getting heavier and heavier and then I started hearing a high pitched whistle, kind of from the side of the house, and then the siding started slamming back and forth,” she said.

When it was over, she saw the damage on her property and even worse damage across the street at her friends’ house. Those friends weren’t home, so Ennen said she spent her Saturday night texting them pictures of what happened.