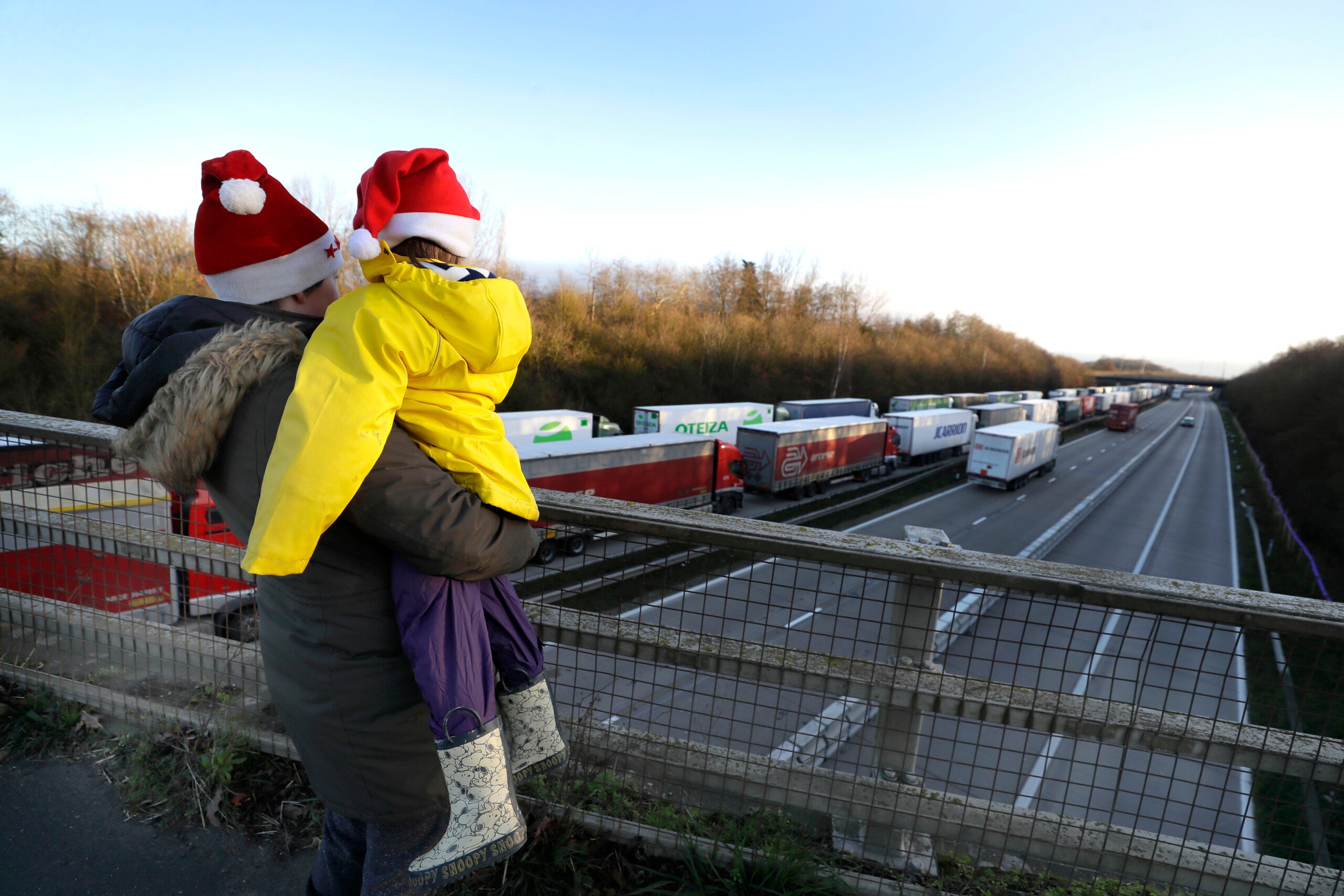 A mother and child look at the line of trucks parked up on the M20, part of Operation Stack in Ashford, Kent, England, Friday, Dec. 25, 2020. Thousands wait to resume their journey across The Channel after the borders with France reopened. Trucks inched slowly past checkpoints in Dover and headed across the Channel to Calais on Thursday after France partially reopened its borders following a scare over a rapidly spreading new virus variant. (AP Photo/Kirsty Wigglesworth)
by: PAN PYLAS Associated Press
Posted: Dec 25, 2020 / 08:13 AM EST / Updated: Dec 25, 2020 / 08:13 AM EST

LONDON (AP) — Around 1,000 British soldiers were spending Christmas Day trying to clear a huge backlog of truck drivers stuck in southeast England after France briefly closed its border to the U.K. then demanded coronavirus tests from all amid fears of a new, apparently more contagious, virus variant.

Even as 4,000 international truck drivers spent yet another day cooped up in their cabs, some progress was evident Friday, with traffic around the English Channel port of Dover moving in an orderly fashion towards the extra ferries that were put on to make the short crossing across to Calais in northern France.

The military personnel were directing traffic and helping a mass testing program for the drivers, who must test negative to enter France. French firefighters have also been drafted to help the military test drivers for coronavirus.

Officials from Britain’s Department for Transport said all but three of the 2,367 coronavirus tests conducted so far have been negative.

France closed its border for 48 hours to the U.K. last Sunday after British Prime Minister Boris Johnson said a variant of the virus that is 70% more transmissible is driving the rapid spread of infections in London and surrounding areas. As a result, the capital and many other parts of England have seen lockdown restrictions tightened and family holiday gatherings cancelled.

Most of the testing is being conducted at a disused airfield at Manston Airport, 20 miles (33 kilometers) from Dover. Free food and drink was being sent to the stranded truck drivers and more than 250 portable toilets were put in at Manston, with 32 others placed along the gridlocked M20 highway.

“The most reassuring thing is that food is getting through at Manston, and I have to say a big thank you to everyone who volunteered to help drivers stick it out in cold conditions in the days leading up to Christmas,” said Duncan Buchanan of Britain’s Road Haulage Association.

The mood among the stranded drivers appeared to be mostly sanguine, especially compared to their anger earlier this week at the situation and the lack of facilities.

“I know it’s been hard for many drivers cooped up in their cabs at this precious time of year, but I assure them that we are doing our utmost to get them home,” said British Transport Secretary Grant Shapps.

The virus has been blamed for over 1.7 million confirmed deaths worldwide, including nearly 70,000 in Britain, the second-highest death toll in Europe behind Italy.

On Saturday, Britain is extending tighter lockdown restrictions to more areas as authorities try to stem the spread of the new variant. Over the past two days, the U.K. has recorded its two highest daily infection numbers, at just below 40,000. That is stoking fears that the country’s beloved National Health Service will face acute capacity issues in its hospitals soon and thousands more people will die from the virus.

In a video message to the nation, Johnson said this Christmas was “not about presents, or turkey, or brandy butter” but about hope, in the form of coronavirus vaccine shots being delivered and more vaccines being developed.

Johnson said Thursday that more than 800,000 people in Britain have received the first dose of the vaccine developed by American pharmaceutical firm Pfizer and German biotechnology company BioNTech. The U.K. was the first country in the world to approve the vaccine and began inoculations for health workers and those over 80 on Dec. 8.