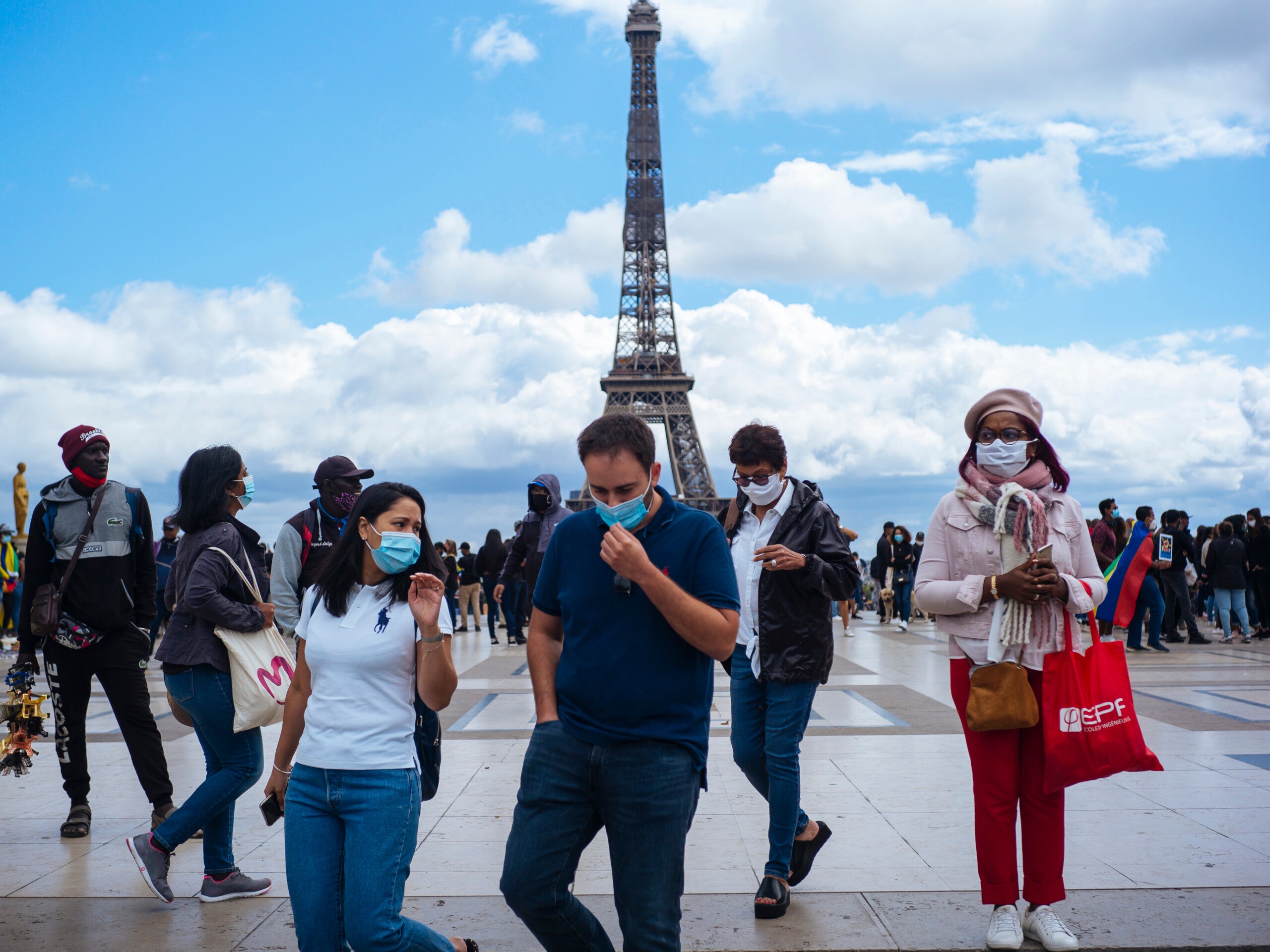 People wearing face masks stroll at Trocadero plaza near the Eiffel Tower, in Paris, Saturday, Aug. 29, 2020. France registered more than 7,000 new virus infections in a single day Friday, up from several hundred a day in May and June, in part thanks to ramped-up testing. Masks are now required everywhere in public in Paris as authorities warn that infections are growing exponentially. (AP Photo/Kamil Zihnioglu)
by: By ANGELA CHARLTON and SYLVIA HUI Associated Press
Posted: Aug 30, 2020 / 12:24 PM EST / Updated: Aug 30, 2020 / 12:24 PM EST

PARIS (AP) — Not all French classrooms can safely reopen Tuesday, the country’s education minister acknowledged Sunday, as a persistent rise in coronavirus infections jeopardizes the government’s push to get France’s 12.9 million schoolchildren back into class this week.

Like many governments around the world, France and Britain want to reopen schools starting Tuesday to reduce the learning gaps between rich and poor students that were worsened by the virus lockdown this spring, and to get parents back to work and revive the ailing economy.

With several thousand new infections now reported in France every day, Education Minister Jean-Michel Blanquer told the Journal du Dimanche newspaper that some classes will remain closed when the nationwide reopening begins Tuesday, but “as few as possible.”

With less than 48 hours to go before the first French school bells ring, he said openings and closures were “being decided by a day-by-day analysis based on the health situation of each territory.”

French doctors published an appeal Saturday saying that the government’s anti-virus measures for schools aren’t strict enough. They urged masks for children as young as six and a mix of online and in-person schooling.

Currently French schools are set to resume largely as normal, but with masks required all day for everyone 11 and over and some restrictions on movements and gatherings. In contrast, other European countries like Denmark and many school districts in the U.S. are undergoing a full school day revamp that includes smaller classes, more teachers, more separation between students and classes and a mix of in-class and online learning.

Teacher Cécile Cluchier is bracing to face the challenges in her preschool in the Paris suburb of Antony.

“Let’s not fool ourselves,” she said. “We know that with 25 pupils, we won’t always be able to keep an eye on each of them,” and ensure that every young child washes their hands constantly and keeps a proper distance from others.

She also wonders how she’ll be able to teach early language skills and defuse tensions with her face hidden behind a mask.

“In preschool and in this underprivileged area, welcoming kids properly is very important,” she said. “But now, they can’t see my smile.”

France reported 5,453 new daily infections Saturday, compared to several hundred a day in May and June. The national health service says the growth of COVID-19 cases is now exponential, and neighboring countries have imposed quarantines or testing requirements for people coming in from France.

The infections are also threatening the Tour de France, which kicked off Saturday amid unprecedented restrictions and worries that the world’s premier cycling event won’t make it to the finish line in Paris in three weeks if the virus keeps spreading so fast.

In Britain, officials sought Sunday to reassure parents that schools can safely reopen. In an open letter, Education Secretary Gavin Williamson stressed the importance of having all children back in classrooms for the new school year.

“If a child is not in school, they stand to lose far more than just a few months of learning. It could well put a huge dent in their future life chances,” he said.

Meanwhile, the University and College Union, which represents academic staff in Britain, warned Sunday that the movement of an expected 1 million college students has they return to universities in the coming weeks could spark “a public health crisis.”

Union general secretary Jo Grady told the BBC that tens of thousands of students will be arriving at cities like Manchester, Birmingham and Leicester — cities that have recently seen increased restrictions because of a spike in coronavirus cases.

“The very people who are increasingly getting infected by this virus are being encouraged in mass numbers to move all around the country and congregate and live together,” she said.

The union wants college students to avoid campuses and face-to-face teaching until at least Christmas, unless a robust testing plan is in place.

Britain’s Conservative government has been sharply criticized for its handling of the virus, which has left the country with Europe’s highest confirmed virus toll of nearly 41,600 dead. France has the continent’s third-highest death toll at over 30,600. Experts say all confirmed figures understate the true toll of the pandemic due to limited testing and other factors.