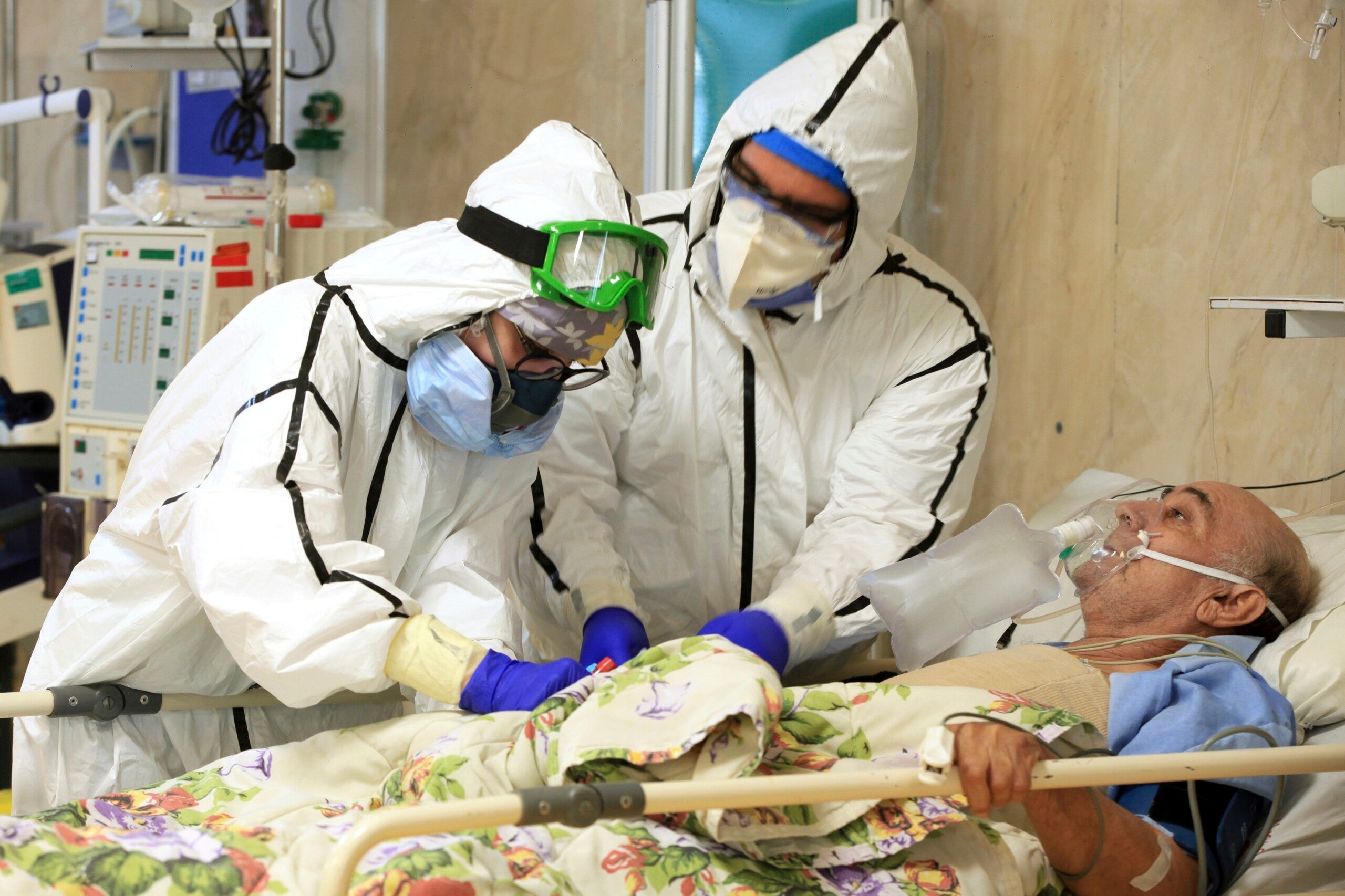 FILE - In this Oct. 14, 2020, photo provided by the Iranian Health Ministry, medics tend to a COVID-19 patient at the Shohadaye Tajrish Hospital in Tehran, Iran. On Tuesday, Nov. 10, 2020, Iran was set to impose a nightly business curfew in its capital for the first time as the country battles a major surge in coronavirus infections. (Akbar Badrkhani/Iranian Health Ministry via AP)
by: AMIR VAHDAT Associated Press
Posted: Nov 10, 2020 / 10:35 AM EST / Updated: Nov 10, 2020 / 10:35 AM EST

TEHRAN, Iran (AP) — Iran imposed a nightly curfew on businesses in Tehran and other cities on Tuesday while Lebanon was preparing for a two-week nationwide lockdown later this week as both countries battle a major surge in coronavirus infections.

Restaurants and nonessential businesses in Tehran and 30 other cities were ordered to close at 6 p.m. for one month, to keep hospitals from becoming overwhelmed and to slow the worsening outbreak, which has killed more than 39,000 — the highest toll in the Middle East. Iran has set single-day death records 10 times over the past month, a sign of how quickly the virus is spreading.

The announcement of new limits on Tehran’s bustling cafes and shops, the strictest since a brief nationwide business shutdown in April, reflects the growing sense of urgency among officials. In a first, Iranians’ phones lit up on Monday with a personal appeal from Saeed Namaki, the health minister.

“Do not leave your house for as long as you can and stay away from any crowded places,” his text read. “Coronavirus is no joke.”

Yet in the face of a steep economic decline, Iran continues to avoid a tougher lockdown. The country is already squeezed by unprecedented American sanctions reimposed in 2018 when the Trump administration withdrew from Tehran’s nuclear accord with world powers. Iran’s currency has plunged to new lows in recent weeks, hurting millions of destitute citizens.

Authorities may introduce other targeted measures, like a nighttime ban on through traffic on streets to keep Iranians from going to parties, Tehran Governor Anoushiravan Bandpay said.

As Iran’s infection rate soars and strains hospitals, the debate over the government’s response to the virus has grown heated. Medical officials this week lambasted the government’s refusal to shut down the hard-hit capital, which they say is the only hope for containing the virus’ spread.

“The lack of a lockdown in Tehran is a disaster,” said Mino Mohraz, a member of the country’s coronavirus task force, according to local media.

“Usually countries that do not listen to health officials face problems,” she added. “A good example is the United States.”

Hosseinali Shahriari, who heads a parliamentary health committee, sent a letter Tuesday to President Hassan Rouhani demanding that he impose a centralized lockdown up to 30 days in all provincial capitals, the semi-official Tasnim news agency reported.

In Lebanon, caretaker Prime Minister Hassan Diab said the lockdown will begin on Saturday and last until the end of the month.

The Lebanese announcement came despite harsh criticism by business sectors that have been suffering for more than a year as the country passes through its worst economic and financial crisis.

The head of Lebanon workers union, Bechara el Asmar, warned on Monday the effects of a complete lockdown “will be catastrophic for workers and economic activities.” Daily laborers cannot afford to stay at home, he said.

Aya Majzoub of the Human Rights Watch said the crisis has thrown more Lebanese below the poverty line, adding that the government is obliged to ensure that everyone has adequate food, water, health care, and other basic needs, “including when the population is subject to stay-at-home orders.”

Tiny Lebanon has registered 95,355 cases and 732 deaths of the virus but the real numbers are believed to be much higher. Those numbers began rising quickly following a massive Aug. 4, blast at Beirut’s port that killed and wounded many and caused damage worth billions of dollars.

Many intensive care units meant for coronavirus cases have been used to treat thousands of injured in the port explosion.

“We have reached a very critical period regarding the spread of the virus and we are left with no other alternatives,” Diab said, suggesting the lockdown could be extend. “”We are worried that we might reach a point where people die in the streets with no places available at hospitals.”

Over the past weeks, dozens of Lebanese towns of villages were locked down but the move did not stop the virus. Some sectors have been exempted, including flour mills, bakeries, banks and clinics.

Meanwhile, virus cases continue to climb in Sudan, where on Tuesday the health ministry announced that Acting Health Minister Ossama Abdel-Rahim, along with two other senior health officials, had contracted COVID-19 and were experiencing symptoms. They’re the latest government officials to be infected in the East African country, which has reporteded some 14,000 cases, although testing remains limited.

Associated Press writers Bassem Mroue in Beirut and Samy Magdy in Cairo contributed to this report.