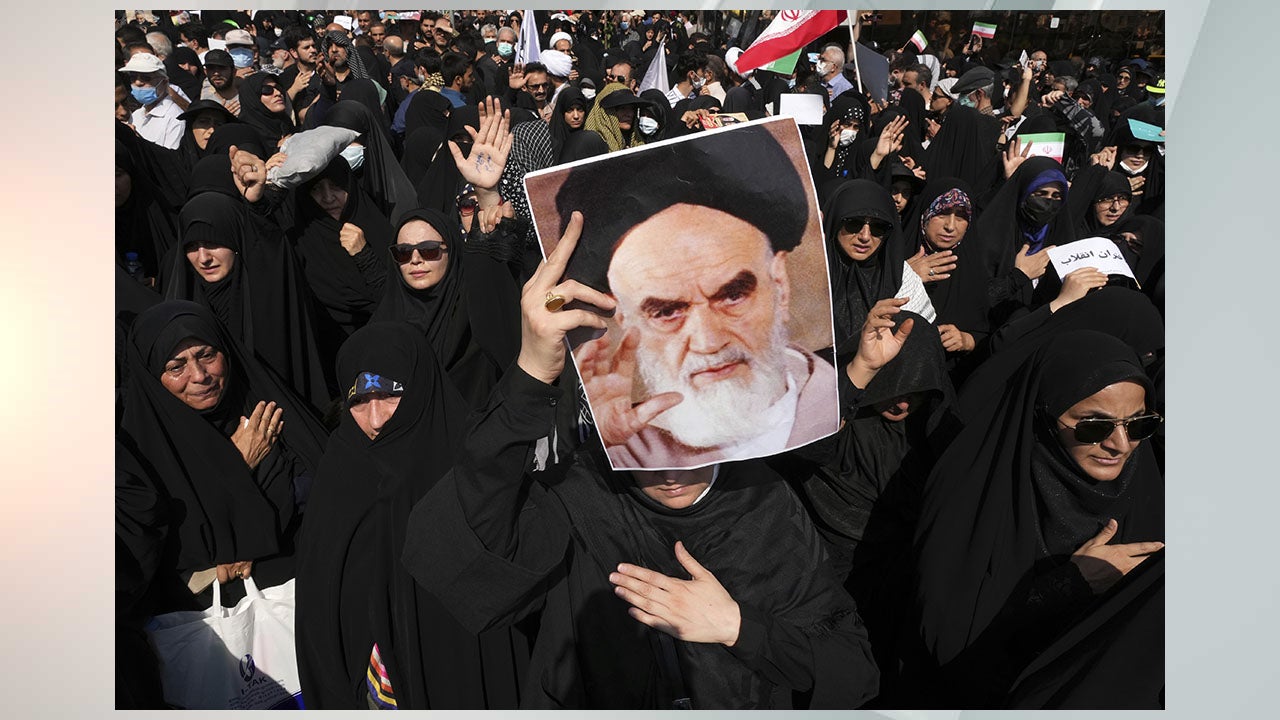 A pro-government demonstrator on Sept. 23, 2022, holds a poster of the late Iranian revolutionary founder Ayatollah Khomeini while attending a rally after the Friday prayers to condemn recent anti-government protests over the death of a young woman in police custody in Tehran, Iran. (AP Photo/Vahid Salemi)
by: Associated Press
Posted: Sep 23, 2022 / 09:15 PM EST / Updated: Sep 23, 2022 / 09:17 PM EST

DUBAI, United Arab Emirates (AP) — Iranian counterprotesters gathered across the country on Friday in a show of support for authorities after nearly a week of anti-government protests and unrest over the death of a young woman who was being held by the morality police.

Thousands attended a rally in the capital, Tehran, where they waved Iranian flags, and similar demonstrations were held in other cities. The government claimed the demonstrations of support were spontaneous. Similar rallies have been held during past periods of widespread protests.

The pro-government demonstrators chanted against America and Israel, according to state media, reflecting the official line that blames the latest unrest on hostile foreign countries.

State TV suggested late on Friday that the death toll from this week’s unrest could be as high as 35, raising an earlier estimate of 26. Anti-government protesters and security forces have clashed in several major cities in the most severe political violence since 2019, when rights groups say hundreds were killed amid demonstrations against a hike in state-controlled gasoline prices.

In response, the U.S. Treasury Department said it would allow American tech firms to expand their business in Iran to boost internet access for the Iranian people. Iran is under heavy U.S. and international sanctions.

A state TV newswoman said late Friday that 35 protesters and policemen had been killed since the protests erupted last Saturday after the funeral of the 22-year-old Mahsa Amini, without elaborating. She said official statistics would be released later, but authorities have not provided a full accounting of deaths and injuries during past unrest.

A tally by The Associated Press, based on statements from state-run and semiofficial media, shows that at least 11 people have been killed. Most recently, the deputy governor of Qazvin, Abolhasan Kabiri, said that a citizen and paramilitary officer had been killed there.

The crisis unfolding in Iran began as a public outpouring of anger over the the death of Amini, a young woman who was arrested by the morality police in Tehran last week for allegedly wearing her Islamic headscarf too loosely. The police said she died of a heart attack and was not mistreated, but her family has cast doubt on that account.

Amini’s death has sparked sharp condemnation from Western countries and the United Nations. Iranians across at least 13 cities from the capital, Tehran, to Amini’s northwest Kurdish hometown of Saqez have poured into the streets, voicing pent-up anger over social and political repression.

“The death has tapped into broader antigovernment sentiment in the Islamic Republic and especially the frustration of women,” wrote political risk firm Eurasia Group. It noted that Iran’s hard-liners have intensified their crackdown on women’s clothing over the past year since former judiciary chief Ebrahim Raisi became president.

“The prospect of the leadership offering concessions to Iranian women is minimal,” it said. “In the cold calculus of Iranian leaders, the protests have likely gone far enough and a more forceful response is required to quell the unrest.”

Raisi condemned the protests as he arrived back in Iran after addressing the United Nations General Assembly earlier this week.

“We have announced many times that if anyone has a fair comment, we will listen to it. But anarchy? Disturbing national security? The security of people? No one will succumb to this,” he said.

Videos on social media show protesters in Tehran torching a police car and confronting officers. Others show gunfire ringing out as protesters bolt from riot police, shouting: “They are shooting at people! Oh my God, they’re killing people!”

In the northwestern city of Neyshabur, protesters cheered over an overturned police car. Footage from Tehran and Mashhad shows women waving their obligatory headscarves, known as hijab, in the air like flags while chanting, “Freedom!”

Separately, hackers have targeted a number of government websites in recent days, taking some of them down at least briefly. On Friday, hackers interrupted Iran’s Channel 3 on a popular streaming website and played videos in support of the protests. Normal programming was restored a couple of minutes later.

The protests have grown into an open challenge to the theocracy established after the 1979 Islamic Revolution. The chants have been scathing, with some chanting “Death to the dictator!” and “Mullahs must be gone!”

Local officials have announced the arrest of dozens of protesters. Hasan Hosseinpour, deputy police chief in the northern Gilan province, reported 211 people detained there on Thursday. The government of the western Hamadan province said 58 demonstrators had been arrested.

The New York-based Committee to Protect Journalists said Friday that at least 10 reporters have been arrested since the start of the protests, many of them during late night raids on their homes by security forces who did not identify themselves.

Iran has grappled with waves of protests in the recent past, mainly over a long-running economic crisis exacerbated by American sanctions linked to its nuclear program. In November 2019, the country saw the deadliest violence since the revolution, as protests erupted over gas price hikes.

Economic hardship remains a major source of anger today as the prices of basic necessities soar and the Iranian currency declines in value.

The Biden administration and European allies have been working to revive the 2015 nuclear accord, in which Iran curbed its nuclear activities in exchange for sanctions relief, but the talks have stalled for months.

The Eurasia Group said the protests make any immediate return to the agreement less likely, as Iran’s government will be more hesitant to make concessions at a time of domestic unrest and the United States will be reluctant to sign a deal as Iran violently cracks down on dissent.