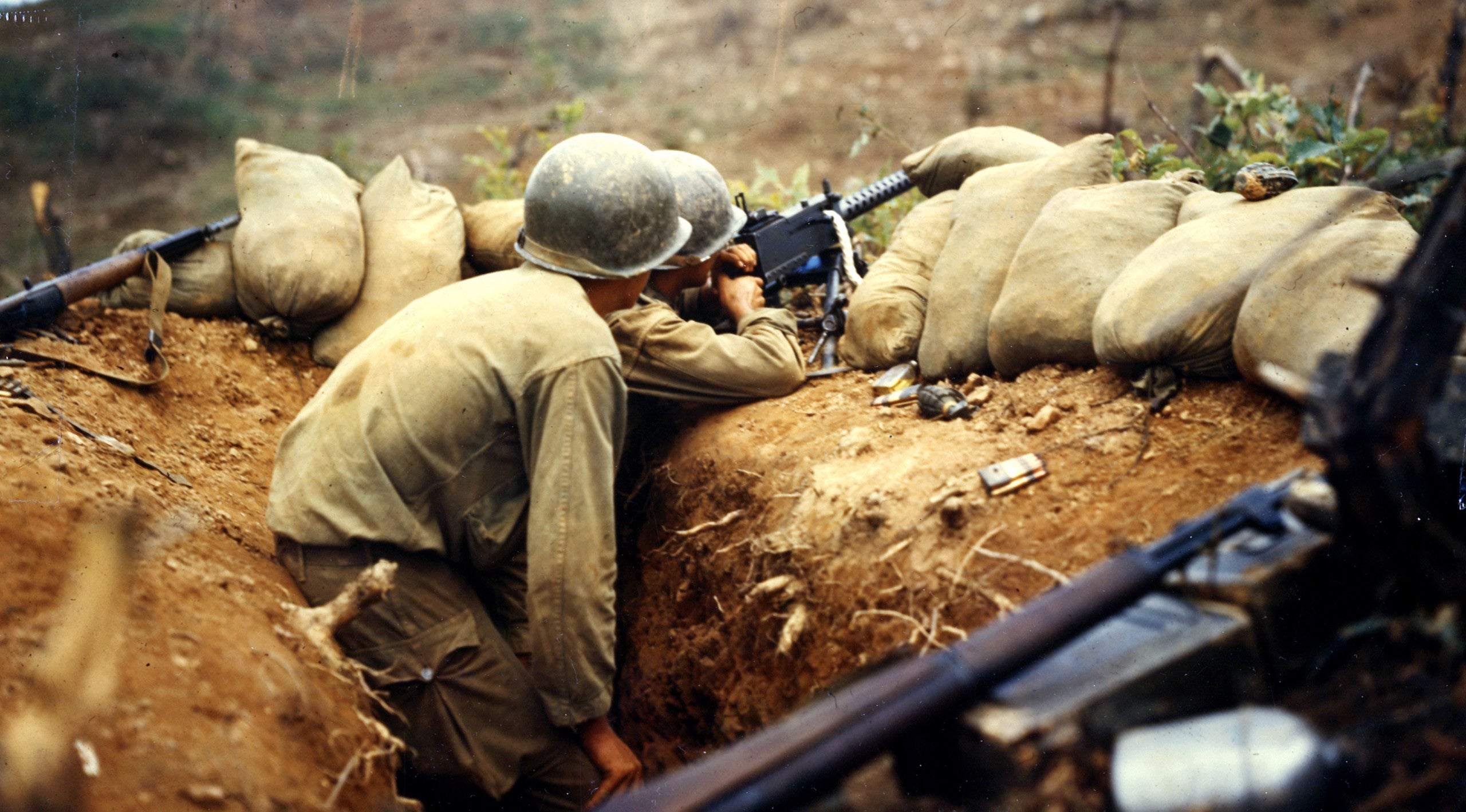 (CNN) — Seventy years ago this week, more than 135,000 North Korean troops invaded South Korea, starting a war that cost millions of lives and left scars that linger to this day.

Yet, the Korean War has been forever overshadowed by World War II, a much larger conflict that ended less than five years earlier. Even the US Army refers to Korea as “the Forgotten War” — despite more than 36,000 American lives lost.

Sixteen nations, including the United States, sent combat troops in aid of South Korea under the United Nations Command. Chinese troops intervened on the North Korean side.

War broke out on June 25, 1950, when North Korean forces stormed across the 38th parallel dividing North and South Korea. An armistice signed on July 27, 1953, stopped the conflict, but the war never officially ended because there was no peace treaty.

Those efforts have since collapsed, as have attempts by US President Donald Trump to officially end the conflict and have North Korea give up a nuclear weapons program that could threaten the US mainland.

While the twists and turns of today’s US-North Korea relationship have put a spotlight on the Korean War’s legacy, it is still a widely overlooked conflict.

Here are six things you might not know about the Korean War:

The US Army once controlled one of the most secretive cities on Earth, Pyongyang

It’s almost impossible for Americans to travel to North Korea or its capital city. US passport holders are not allowed to go there without special permission from the US State Department.

But for eight weeks in 1950, Pyongyang was under control of the US Army.

On October 19 of that year, the US Army’s 1st Cavalry Division along with a division of South Korean soldiers captured the North Korean capital, according to US Army histories.

The US forces quickly made themselves at home, according to the histories.

By October 22, the US Eighth Army had set up its advance headquarters in what was the headquarters building for North Korean leader Kim Il Sung.

A picture from the time shows an American intelligence officer sitting at Kim’s desk with a portrait of Soviet Union leader Joseph Stalin hanging on the wall behind him.

But the US military’s occupation of Pyongyang was short-lived. When Chinese troops entered the war in late November 1950, they quickly pushed south and vanquished US forces from Pyongyang by December 5.

Most images of the Korean War are of ground battles fought in places like the Chosin Reservoir and Incheon. But much of the destruction wreaked on North Korea by the US military was done in a relentless bombing campaign.

During the three years of the Korean War, US aircraft dropped 635,000 tons of bombs — both high explosive and incendiary — on North Korea. That’s more than the 500,000 tons of bombs the US dropped in the Pacific in the entirety of the Second World War, according to figures cited by historian Charles Armstrong in the Asia-Pacific Journal.

Journalists, international observers and American prisoners of war who were in North Korea during the war reported nearly every substantial building had been destroyed. By November 1950, North Korea was advising its citizens to dig holes for housing and shelter.

Gen. Curtis LeMay, the father of US strategic bombing and the architect of fire raids that destroyed swathes of Japanese cities in World War II, said this of the American bombing of North Korea:

“We went over there and fought the war and eventually burned down every town in North Korea anyway, some way or another.”

Armstrong said that bombing of North Korea has effects that linger to this day.

“The DPRK (Democratic Republic of Korea) government never forgot the lesson of North Korea’s vulnerability to American air attack, and for half a century after the Armistice continued to strengthen antiaircraft defenses, build underground installations, and eventually develop nuclear weapons to ensure that North Korea would not find itself in such a position again,” Armstrong wrote.

When World War II ended, control of the Korean Peninsula — occupied by defeated Japanese troops — was divided between the Soviet Union in the north and the United States in the south.

Kim Il Sung, the leader of North Korea, wanted to unite the two Koreas under communist rule and sought permission of Soviet leader Joseph Stalin to do so by force, according to records from the Wilson Center.

Upon Kim’s first request to invade in March 1949, Stalin was wary and did not want to be pulled into a conflict with the United States, which still had occupation troops in South Korea.

But when those troops were pulled in the summer of 1949, Stalin’s opposition softened, and by April 1950 the Soviet leader was ready to hear Kim out again when the North Korean leader visited Moscow.

Stalin told Kim that the USSR would back the invasion, but only if Kim got communist China to approve too.

Emboldened by communist China’s victory over Nationalist forces in 1949 — in a civil war in which Washington did not intervene — Chinese leader Mao Zedong agreed and offered to be a backup force for North Korean troops in the eventuality the US intervened.

With that, Kim had the green light to invade.

The Korean War saved Taiwan from a potential communist takeover

In 1949, communist China was amassing forces along its coast to invade Taiwan, the island to which Chiang Kai-shek and his Nationalist forces had fled after losing to Mao and the communists in the Chinese Civil War.

But the outbreak of the Korean War put a big roadblock in the way of communist China’s plans — the US Navy. Fearful of the fighting in Korea spreading across East Asia, President Harry Truman dispatched US warships to the waters between China and Taiwan.

The US State Department tells how close Taiwan, now a self-governed entity that Beijing still claims as part of China, came to a potential communist takeover.

“In late 1949 and early 1950, American officials were prepared to let PRC (People’s Republic of China) forces cross the Strait and defeat Chiang, but after the outbreak of the Korean War in June 1950, the United States sent its Seventh Fleet into the Taiwan Strait to prevent the Korean conflict from spreading south,” reads a passage from the department’s Office of the Historian.

“The appearance of the Seventh Fleet angered the Chinese communists, who transferred their troops poised for an invasion of Taiwan to the Korean front,” it reads.

By October 19, 1950, 12 divisions of communist Chinese troops, more than a quarter-million men, were in North Korea, according to a Brookings Institution account.

Those Chinese troops would inflict horrific losses on the US and South Korean troops they faced, eventually driving them out of North Korea completely.

But China also suffered massive losses; more than 180,000 of its troops were killed.

Jet fighters entered military service in World War II with the introduction of the German Messerschmidt 262. But the jet fighters didn’t go head-to-head in a “Top Gun”-style dogfight until the Korean War.

Records seem to agree that first dogfight occurred over Sinuiju in North Korea, near the Yalu River, and its border with China on November 8, 1950. The Americans, flying F-80 Shooting Star jets, were confronted by MiG-15s, Soviet-made jets that were probably being piloted by Soviet pilots from bases in China.

According to a report from the historian of the US Air Force’s 51st Fighter Wing, eight to 12 MiGs came after an American flight of four F-80s that day. In a 60-second encounter with one of those MIGs, Air Force 1st Lt. Russell Brown hit a MiG-15 with fire from his jet’s cannon and saw it explode in flames, becoming the first jet fighter pilot to score a kill in a dogfight, the report says.

But others dispute that account, with a report from the US Naval Institute (USNI) saying that Soviet records show no MiGs were lost that day.

What is certain is that the next day, November 9, 1950, US Navy Lt. Cmdr. William Amen, flying an F9F fighter off the aircraft carrier USS Philippine Sea, shot down a MiG-15 during airstrikes against bridges on the Yalu River.

Soviet records confirm the MiG-15 loss that day, according to the USNI report.

Later in the war, the US introduced the F-86 jet to the Korean conflict. That plane won fame in battles against the MiG-15 in what was know as “MiG Alley,” the area along the Korea-China border, where the Soviet pilots flew out of bases on the Chinese side.

The National Museum of the US Air Force in Ohio explains MiG Alley this way:

“Large formations of MiGs would lie in wait on the Manchurian side of the border. When UN aircraft entered MiG Alley, these MiGs would swoop down from high altitude to attack. If the MiGs ran into trouble, they would try to escape back over the border into communist China. (To prevent a wider war, UN pilots were ordered not to attack targets in Manchuria.) Even with this advantage, communist pilots still could not compete against the better-trained Sabre pilots of the US Air Force, who scored a kill ratio of about 8:1 against the MiGs.”

Though millions of lives were lost during the fighting on the Korean Peninsula between 1950 and 1953, they were technically casualties of what was called a “police action.”

Under the US Constitution, only the US Congress can declare war on another nation. But it has not done so since World War II.

When North Korea invaded the South in 1950, US President Harry Truman sent the US military to intervene as part of a combined effort approved by the United Nations Security Council.

“Fifteen other nations also sent troops under the UN command. Truman did not seek a formal declaration of war from Congress; officially, America’s presence in Korea amounted to no more than a ‘police action,'” reads a passage from the US National Archives.

And those police actions have become the norm for US military intervention ever since. The Vietnam War, the wars in Iraq, Afghanistan and Kosovo, all have seen US troops enter combat under congressional authorizations for the use of military force (AUMF), according to the US House of Representatives website.

Though the AUMF had been around since the beginning of the republic, “after World War II … AUMFs became much broader, often granting Presidents sweeping authority to engage America’s military around the world,” the US House website says.

“The war was the first large overseas US conflict without a declaration of war, setting a precedent for the unilateral presidential power exercised today,” Emory University law professor Mary Dudziak wrote in a 2019 opinion column for the Washington Post.

“The Korean War has helped to enable this century’s forever wars,” Dudziak wrote.