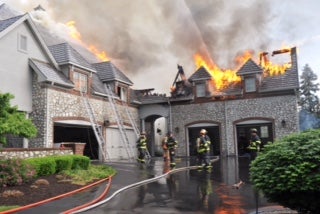 A bolt of lightning struck the home at 5:36 p.m. Saturday, investigators confirmed with the help of Strikenet.com.

Since no one was home at the time, the fire burned for about 20 minutes before firefighters were alerted. A crew on its way to a different call spotted heavy smoke coming from the large house.

Thirty-one firefighters responded to the fire. It took about an hour to get it under control.

One firefighter was slightly injured.

The lightning that struck the home was measured at 23.1 kA.