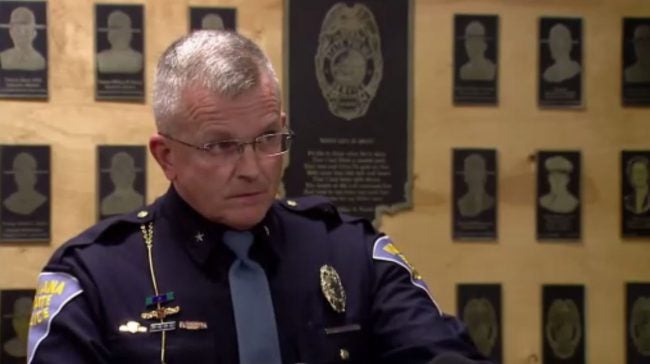 INDIANAPOLIS (WISH) — Indiana State Police at a press conference Thursday afternoon addressed allegations by the NAACP that the investigation into a 2016 fire that killed four little girls “smells of a cover-up.”

The early morning house fire broke out on Nov. 21, 2016, at a home on Columbia Street in Flora. The fire resulted in the death of four children: 11-year-old Keyana Davis, 9-year-old Keyara Phillips, 7-year-old Kerriele McDonald and 5-year-old Konnie Welch. Their mother, Gaylin Rose, was injured in the fire, along with a Flora police officer and a Carroll County sheriff’s deputy.

Barbara Bolling-Williams, the NAACP conference president, questioned the investigation practices at the opening of their Indianapolis conference on Thursday, saying the organization wants answers: “There are people out there who know, it smells, we’re just getting started but it smells of a cover-up because how are you going to go and have investigation for almost a year and doesn’t appear that we are any further along on this. And now there seems to be a silence out there that’s been imposed.”

“I don’t think anything’s bothered me more than what’s occurred in Carroll County, Indiana, in my entire lifetime. And even the notion, even the notion that there would be the perception of a cover-up, in regards to our investigation involving four little girls, is not only unsubstantiated, but ladies and gentlemen, it strikes me at the very core of who I am and the industry that I represent. I’d give my life to find out who killed those little girls,” Doug Carter, Indiana State Police superintendent, said Thursday.

Carter responded directly to Bolling’s statement saying, “There were specific comments made such as, ‘No answer to the family,’ ‘What happened,’ ‘No one’s been brought to justice.’ I hope that one day we can tell you what we know. I hope that one day I can look into the eyes of the person who killed four little girls and then explain to you what we knew and when, but criticize me all you want to — I’m not going to do it today for a number of reasons that all of you know because you’ve been around a long time.”

Bolling-Williams said it appears the investigation has been “bungled some kind of way.”

She said police are not updating the victims’ family on the investigation.

Carter said someone suggested he should not reach out to the victims’ family, although he did not say who said that or exactly why.

“It was just recommended to me that I do not talk to the family because that wasn’t a part of the day-to-day operation of the investigation,” Carter said. “And that made sense to me.”

He also said he had not heard from the NAACP concerning the case, and that neither he nor his investigators had had an opportunity to talk to the organization.

Carter held up a blue sticky note, calling the names of the four girls killed in the fire, in addition to those of the two girls found dead in Delphi in February. All six girls died in Carroll County, with less than three months between the incidents.

“The sticky note’s been on my desk for months, close to a year now, and I have the exact same one at home. It’s the last thing I see every single day. The Carroll County residents have endured something very few of us will ever be able to comprehend or understand,” Carter said.

“We will stay in Delphi, as I told you months ago, until I am no longer the superintendent or not breathing. This is so very complicated, and even the inference that it’s about race is so very wrong. It’s never mattered to me and never will. The notion that we will not do everything in our power from the right and left limits of what we can do legally and morally and ethically is just simply wrong. I encourage the partnership with the folks who are in Indianapolis right now, with the NAACP,” Carter said. He went on to welcome suggestions for increased awareness of the incident from the NAACP.

Bolling-Williams said the investigation is “reminiscent” of the Birmingham church bombing that killed four girls in the 1960s.

In November of 2016, the Indiana State Fire Marshal’s Office ruled the cause of the fire as undetermined, and investigators said the fire originated in the kitchen area. They also said no foul play was suspected and no accelerants were found.

In May of 2017, Detective Brock Russell took over the fire investigation for the previous investigator.

In June, the Carroll County prosecutor asked investigators not to release any additional information to the public.

First Sgt. Jerry Holeman with the Indiana State Police said discussion about the case could impact the investigation.

“What I want to make clear is just because we’re not discussing the facts of the case, we are still heavily involved in the investigation and that is still priority for us,” Holeman said. “And we are going to continue to work with the state, local and federal agencies that are involved.”

State fire investigator Dennis Randle with the Indiana Department of Homeland Security resigned from his position on June 23.

The reward for information leading up to the arrest and conviction of the person or persons responsible for the deadly fire is currently at $5,000, according to ISP.