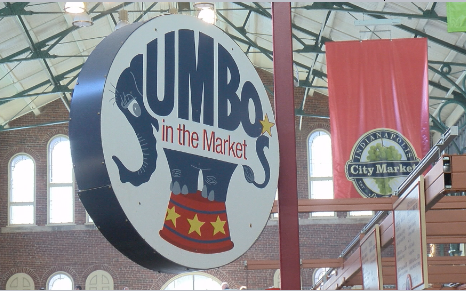 INDIANAPOLIS (WISH) — It was the longest-standing restaurant in the City Market, and now, after more than four decades, Jumbo’s is closed.

Joe Perin of the City Market said Jumbo’s didn’t have an aggressive marketing and communication strategy, which contributed to its demise. The closing comes as a surprise to customers, who say, the food spoke for itself.

“How often did I not eat there,” Chris Buckner said while laughing. “Pretty much two to three times a week at least, and maybe a couple times a day.”

To say that Jumbo’s had its fair share of regulars would be an understatement.

“The thing I’m going to miss about it is the sliced meat, fresh cut meat, everyday. The ham, the turkey, the roast beef, the turkey was my favorite,” said Buckner.

Mike Batarseh added, “I liked their chicken and noodles.”

There are no more chicken and noodles. Instead, there are empty deli cases where the meats once were. There’s also a hand written sign posted on the drink machine that lets customers know, after 42 years, they’re closed.

Across the way at Batarseh’s restaurant, Cath Inc., news of the closing came as a shock.

“I saw him Monday, I think. Next thing, I was off Tuesday and Wednesday, I came, they’re gone,” he said.

Buckner added, “Nobody even knew it was coming. I just came to work and they said they’re closed…and I’m like what?!”

Currently, there are 35 merchants out of 36 possible rental spaces in the City Market. According to Perin, Jumbo’s leaving created once vacancy, making it at 97 percent occupancy, higher than the five-year average of 95%. Perin is confident that it won’t take long to rent the space.

Although it’s too early to tell who will move into Jumbo’s space, the regulars already have some ideas.

24-Hour News 8 attempted to contact Jumbo’s for comment, however their number has been disconnected. Jumbo’s closing comes after several other downtown restaurants closed their doors; including Burbon Street and the Milano Inn.