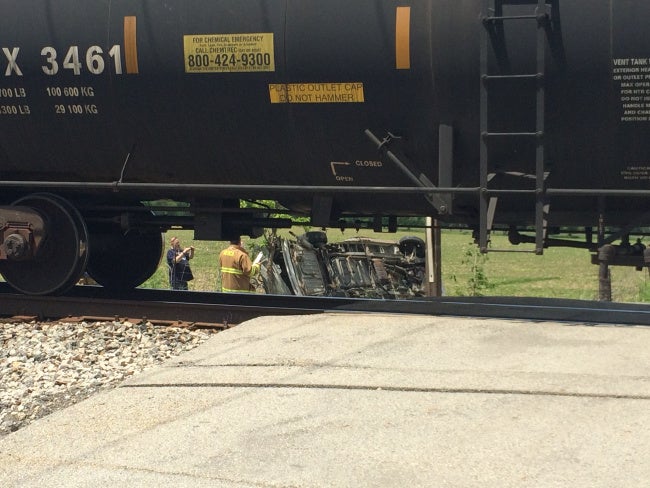 TIPPECANOE COUNTY, Ind. (WLFI) – Two people were sent to the hospital after a van and train collide on the Fountain-Tippecanoe County Line. This is the second crash at the same location since early March.

Tippecanoe, Warren and Fountain counties were all called to the scene on County Line Road shortly before 2 p.m. Friday for a crash involving a van and train. Tippecanoe County Sheriff’s Office confirmed two people in the van were injured and taken to St. Elizabeth East in Lafayette.

Tippecanoe County sheriff’s deputies said the driver, 19-year-old Fancy Abernathy, of Lafayette, was heading north on County Line Road when she crossed the tracks and the train collided with the van, striking the back door panel on the passenger’s side.

Abernathy told sheriff’s deputies that she didn’t see or hear the train approaching.

Abernathy’s father, Shane Knechel, told WISH-TV’s sister station WLFI that his daughter said her music was too loud and didn’t hear the train coming. Authorities on scene said they did find sub-woofers in the vehicle

Abernathy and her passenger, 21-year-old Jacob Hornback, were responsive and conscious at the scene. Both were taken to St. E with injuries not believed to be life-threatening.

Two puppies were also in the van. The dogs were taken by family members to be evaluated by a veterinarian.

Neither drugs nor alcohol are suspected to be factors at this time. The investigation remains ongoing.

Friday’s crash is the same location of a fatal train crash back on March 6. That crash took the life of 34-year-old Rachel Logan, of West Point, Ind. Investigators say Logan’s pickup truck was dragged 40 yards down the railroad tracks before coming to a stop. She was pronounced dead at the scene.