Let there be light! Luck throws a football, places his bet for Week 1 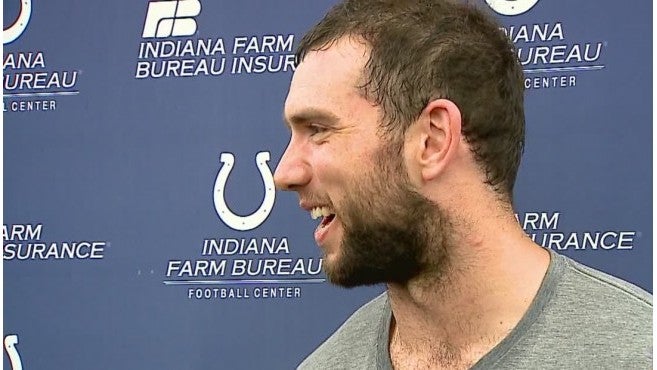 INDIANAPOLIS (WISH) – The secret is out.

The passes seen Tuesday at the Colts complex were not Andrew Luck’s first tosses of the offseason. It turns out Luck has thrown pigskins off all sizes this spring.

On Tuesday, armed with a smaller football, Luck threw his first bomb of 2018 — he believes he will play in the Colts 2018 season opener.

“Absolutely, no, knock on wood, I’m going to be there,” Luck said. “I’ll be playing. I believe it in my bones.”

“We plan on Andrew being the starting quarterback week one,” Head Coach Frank Reich said. “Really, it’s just been the last couple of weeks that my confidence level has started to really rise.”

“He just needs to go back to being old Andrew, and I think he is ready to do that,” Colts owner Jim Irsay said. “I really don’t see him missing a beat”

Despite the little teaser Tuesday and the assurances that there are no doubts at this time from Irsay or Reich regarding Luck’s availability for the season opener, there is still a long way to go here. The next seven weeks leading up to training camp are critical.

“My goal is to be ready to training camp,” which will be in about seven weeks, Luck said. “That doesn’t mean I am throwing a hundred balls a day six days in a row. There is going to be a plan. Frank and I have had some really good conversations.”

Speaking of conversations, are you buying what Jim Irsay is hearing from the people closest to Luck’s rehab?

“He is special. Body fat ratio to muscle, he is almost incomparable, except LeBron James and a couple other of these guys that some of these guys that have worked with him have said. And they’ve said ‘Hey he can probably play beyond his 40s.’”

On a day filled with 5- to 10-yard passes, that quote is what you call “airing it out.”