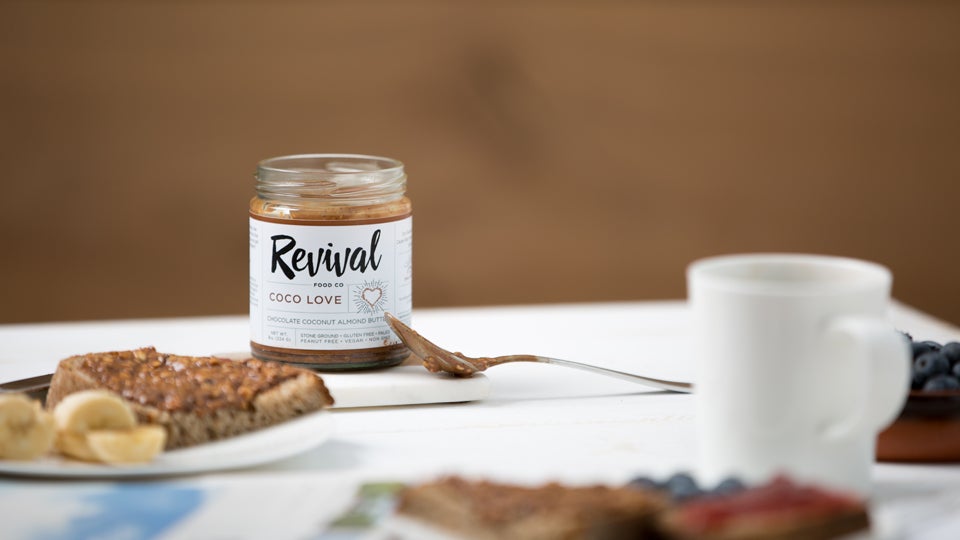 INDIANAPOLIS (Inside INdiana Business) — An Indianapolis-based specialty food company that was inspired in the family kitchen, created in an Indianapolis shared kitchen space, and expanded to local retailers, has now launched its craft almond butter on a national retail platform.

Last week it was placed on the shelves of 1,000 Walmart (NYSE: WMT) locations.

In an interview with Inside INdiana Business, founder Rachel Klein said her idea was born out of a desire to find a better product.

“I started making it because I was just disappointed in everything else that I was finding,” said Klein. “If it says that it’s healthy, I want it to actually be healthy. You know, I don’t want hidden sugars.”

Klein produced small jars of the almond spread and gave them as party favors to her wedding guests. After getting positive reviews from family and friends, Klein decided to give it a shot in the business world…having no business background.

“There’s a healthy respect for failure, but in our family, we really believe in entrepreneurship. My husband and I really believe that anything is possible.”

She launched the product, like many new food products, at the Indianapolis Farmer’s Market. She then got her product on the shelves of Market District stores. Through the Indiana Grown program, Klein was able to market her products at Kroger stores. But she wanted more for her budding company.

“This is it…either I’m going to dial everything in and take it online, do it out of my house and keep it simple. Or I’m going to go big and go national. It’s only going to work one of these ways,” reflected Klein.

Once she took her almond product to a national food show last fall, it set Revival for a major launch. But she almost backed out of the expo.

“I signed up for it and then found out that I was pregnant. I’m like, ‘Oh my gosh, what am I doing with my life? How am I going to do this? How am I going to balance all of this and a newborn baby?’ I almost pulled my business out of the trade show,” shared Klein.

She attended the show and her products caught the attention of Walmart’s national buyer for nut butter and spreads.

“She loved it. And she said Walmart is trying to pivot, like wanting to reach out to those millennial buyers,” explained Klein.

Several months passed when Walmart invited Klein to its global headquarters in Arkansas to sign paperwork. It was in February when the buyer for the world’s largest retailer said the company wanted to place the Revival products in 400 stores.

“I’m like, great. Yeah, we could do like 300 to 400 stores. Inwardly I’m thinking, I’ve never like been in that many stores before, but I’m gonna figure it out,” shared Klein. “That’s one of my mottos. You just say yes. And figure it out later.”

A week later, Klein gave birth to her third child who are all under the age of four.

In June, Walmart told Klein it would like to place her products in 1,000 stores. Since then, the company has acquired a California copacker and a shipper to handle the large volume for the Walmart order.

Klein still produces some of her spreads locally at the Food Beauty Center, a shared maker and kitchen space in Indianapolis. Most of the local production is bulk containers for restaurants. All production will eventually move to the west coast plant.

Klein graduated from Indiana University with a degree in dance, with plans to make a career out of contemporary dancing. But three kids later, and with a deal with Walmart, this entrepreneur is making the moves on the retail mainstage.

“I know I’m so fortunate especially with everything going on. My family life, COVID, there are so many changes. all of this is happening, and I have a new baby at home. at the same time, I’m ordering 57,000 pounds of almonds,” chuckled Klein. “Anything is possible If you put yourself out there. Get your ducks in a row, do the hard work and commit to it, anything really is possible.”