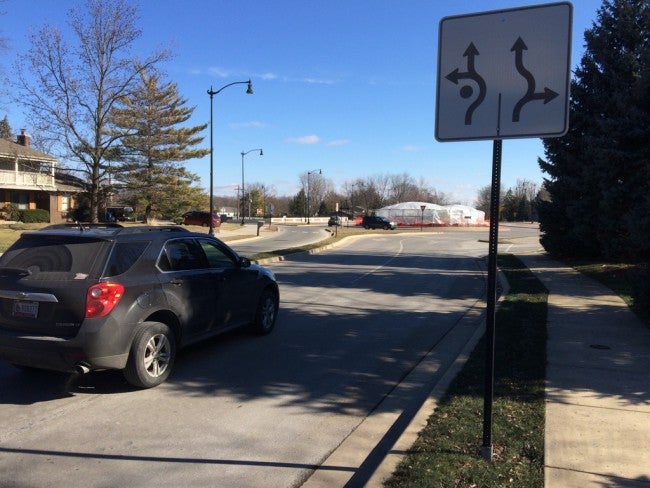 CARMEL, Ind. (WISH) – The increasing number of roundabouts has helped reduce the number of calls Carmel Firefighters deal with, but this safety feature is presenting problems in other ways.

Drive around Carmel, and it’s hard to not find yourself going in circles. That’s by design of course.

The city has added nearly 100 roundabouts to decrease accidents, with another 30 to arrive soon. But when it comes to helping emergency responders get through them, some drivers are stumped.

“Um, pull over and stop,” asked Carmel resident Lauren Klezmer. “And let them go around you?”

“I haven’t thought about it,” Carmel resident Cory Davis said. “I haven’t encountered that. What’s the right answer?”

It’s an answer Carmel Firefighters said some simply don’t know. “Typically we always say, pull over to the right if you see an emergency vehicle approaching, but that’s changing a little bit, you have to keep a little bit more in mind if you’re in a roundabout,” Carmel Fire Department spokesperson Joel Heavner said.

To learn what to do, 24-Hour News 8 took a ride with Heavner.

“If you’re going into the roundabout, proceed to your exit, or proceed to the first exit, and then pull over to the right, and give us the amount room that we need to move past you immediately,” Heavner said.

Heavner says it’s not uncommon to see someone stop in the roundabout, and block their trucks.

“It happens daily,” Heavner said. “Not on every roundabout, depends on if it’s a busy part of the city, or maybe a residential part of the city, but every single day there’s going to be somebody who at least a little bit confused as to what to do in the roundabout.”

The roundabouts are built for the fire trucks and ambulances to drive on them, but Heavner says that’s not ideal. “It’s going to cause damage to some of our vehicles,” Heavner said. “The possible long-term damage, if that continues to happen, isn’t going to be very beneficial to our trucks.”

Educating drivers can be a challenge. But Heavner says he hopes stories like this, and future department videos, can resolve issues before more roundabouts appear.

“There’s not a lot of people who completely panic and lock-up in the middle of a roundabout,” Heavner said. “But when it does happen, it can affect an emergency situation.”