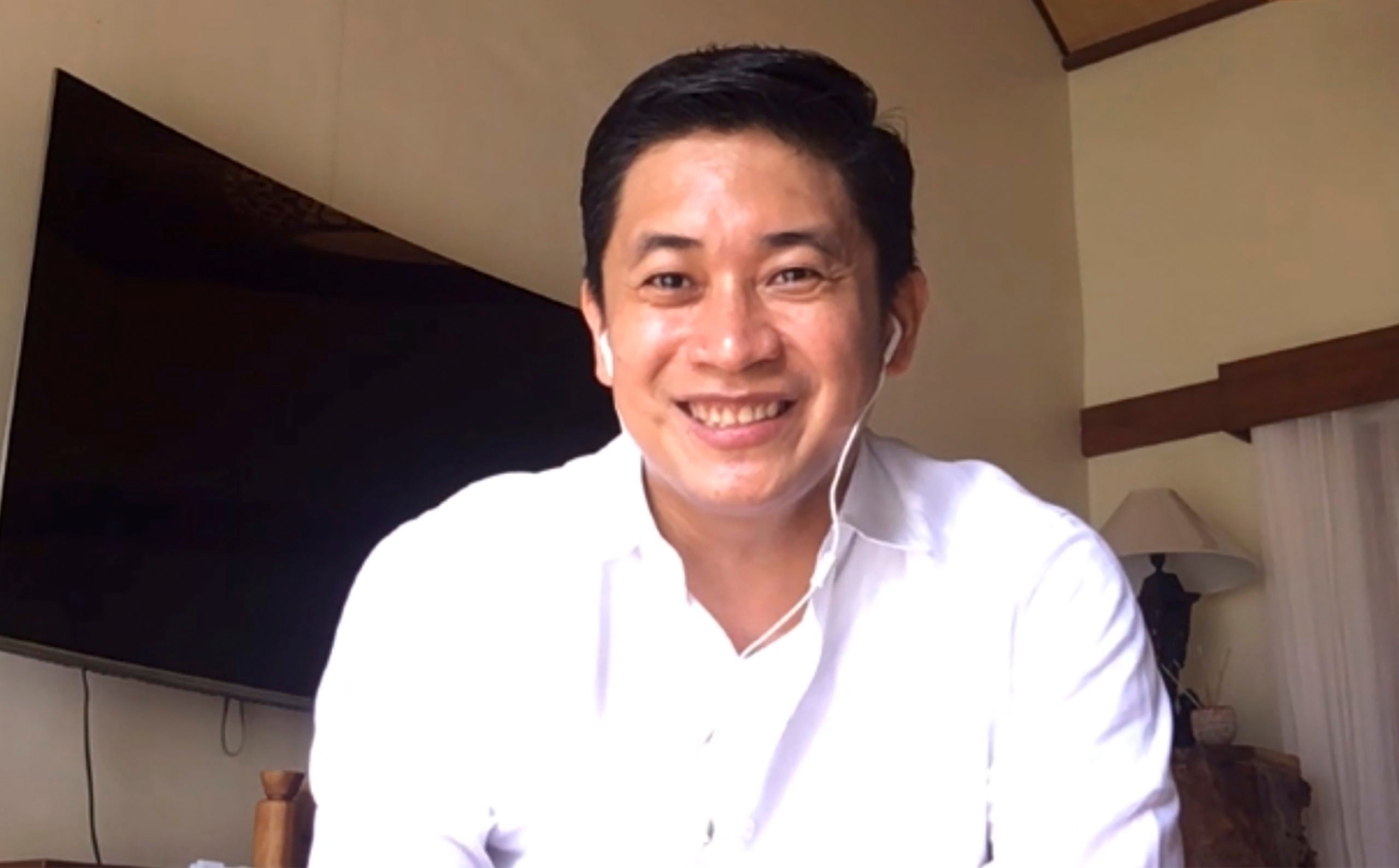 In this image taken from video on Tuesday, March 24, 2020, 48-year old COVID-19 survivor Carlo Navarro smiles during a Skype interview with The Associated Press from Lipa, Philippines, where he continues to be on self-quarantine. Days after he was cleared and discharged from hospital, Navarro shared his COVID-19 experience on a Facebook public post. (AP Photo)
by: KIKO ROSARIO, Associated Press
Posted: Mar 24, 2020 / 10:33 PM EST / Updated: Mar 24, 2020 / 10:33 PM EST

BANGKOK (AP) — When Carlo Navarro, his wife and 15-year-old daughter visited Japan from the Philippines in February, they knew they were taking a chance with the coronavirus, but thought they would be spared if they took precautions. They wore masks and gloves and always had alcohol handy to sanitize their hands.

But Navarro, a 48-year-old tax lawyer, began showing symptoms after they returned home. He became the first Filipino to be officially confirmed with COVID-19, the disease caused by the virus. There are now 552 confirmed cases and 35 deaths in the country.

He has since recovered, and as someone who felt he had been close to death, vowed to spread awareness. The Associated Press asked Navarro five questions about his experience in a telephone interview as he continues his self-quarantine on his farm in Lipa, Philippines.

Q: Where do you suspect you got the virus?

A: “The entire time that we were in in Japan, there was really no contact with anyone that had a cough or cold. But on our way back … I was seated in front of a person, a Filipino person who was coughing vigorously. My daughter told me, ‘Dad, I think it’s dangerous to sit there. You need to move right now.’ I couldn’t move because the plane was about to take off. So it took me another 20 minutes before I could transfer to another seat. And true enough, seven days after we arrived back in the Philippines, I started to develop chills and my temperature was fluctuating. And that night of March 3, I started coughing vigorously. So the following morning, I decided to go to St. Luke’s (hospital) … to have myself tested. That’s the start of my journey as a COVID-19 patient.”

Q: What does it feel like to be a patient?

A: “In the hospital, the coughing persisted. The chills were still there. And then there were muscle pains. My entire body was aching. On the third day, it started to disappear. Like the muscle pains are gone. The chills … they came and went. But my cough was still there. It was on the fifth or sixth day that I started to have diarrhea. And the doctor got scared. … That evening, they X-rayed me and they were able to confirm that pneumonia was beginning to develop in my lungs. By then, the chills were back. And then, that evening of the sixth day, I got a fever. … Those were the symptoms that I was experiencing.”

Q: How were you able to cope?

A: “I was alone in the hospital room because nobody can visit you, not even your family members. So we are really in isolation. It’s a negative pressure room. My wife and I had video calls almost every hour. She was checking on me to make sure that I’ve eaten, that I drank enough water. … And every time I felt fear, I would immediately call my wife and my daughter just to suspend the reality that I was in a hospital.”

___ Q: What was the scariest moment for you?

A: “The scariest moment was maybe starting on the fourth day when people who got admitted at the same time as me started dying early in the morning. You know, you would hear people crying or wailing because they had lost their loved ones.. … I could hear the running of the nurses and doctors outside of my room. And that really scared me. When I asked the nurses, ‘’How are the other patients doing?” one of them said, ‘Sir, number 5. number 6, they died already.’ And they were just beside me. That was the most frightening moment of my life.”

Q. What’s the message you want to share with the public about your experience?

A: “I want you to know that once you have symptoms, you need to immediately isolate yourself. There’s no way you can take the risk that the elderly or high-risk groups in your family will get contaminated or will get the virus. You need to go to the hospital to get yourself tested. If they don’t have the testing kits, you just need to stay home and isolate yourself. It’s important that people know that they should not fear going to the hospital and that’s the only way you can protect your loved ones.”