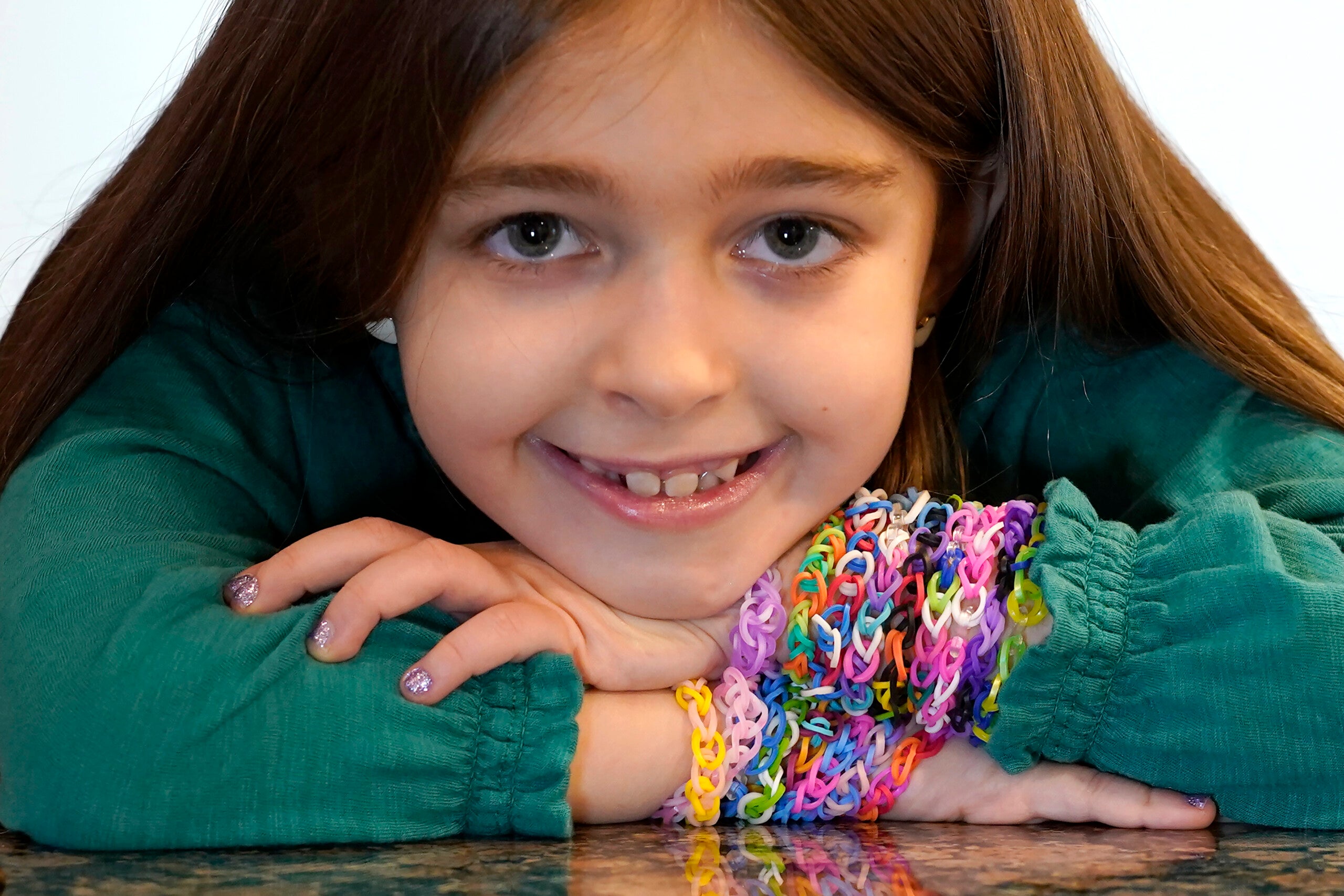 Hayley Orlinsky poses for a portrait Wednesday, Dec. 2, 2020, with several colorful rubber band bracelets she makes in her Chicago home. The 7-year-old has spent most of the coronavirus pandemic crafting the bracelets as a fundraiser, earning nearly $20,000, to buy personal protective equipment for the Ann and Robert H. Lurie Children's Hospital. (AP Photo/Charles Rex Arbogast)
by: SOPHIA TAREEN Associated Press
Posted: Dec 8, 2020 / 10:50 AM EST / Updated: Dec 8, 2020 / 10:50 AM EST

CHICAGO (AP) — Hayley Orlinsky has made so many bracelets, looping colorful rubber bands over her thumb and index finger again and again, that she no longer must watch her hands.

The spunky 7-year-old from Chicago has spent most of the coronavirus pandemic crafting the creations as a fundraiser to buy personal protective equipment for a children’s hospital.

So far, the endeavor has generated nearly $20,000 for Ann and Robert H. Lurie Children’s Hospital, prompting praise and purchases from Chicago politicians, a Broadway actor and her beloved White Sox.

Hayley’s initial goal was $200, which she quickly surpassed, charging $3 a bracelet or $5 for an added charm.

It’s hard for the second grader to grasp how much more $20,000 is by comparison — but she figures it’s a lot.

“It’s more than the tooth fairy gives,” she said.

It all started when she heard news stories about PPE shortages during the COVID-19 pandemic and was inspired to help. The money Hayley raises goes directly to Lurie through a fundraising office. Lurie hasn’t had any problems getting gear and has used the money to pay for masks, goggles, face shields, gloves and other items for medical workers and visitors, said Tracey McCusker, an associate director at the hospital’s foundation.

While many enterprising young people are raising funds for causes close to the heart, the amount Hayley has brought in is unusual.

“Her fundraiser is exponentially more than our typical kid fundraiser,” said McCusker who estimates $500 to $1,000 is about average.

For Hayley, the mission is personal. She spent her first days of life at Lurie’s neonatal intensive care unit after experiencing breathing problems. She wanted the doctors, nurses and medical staff working with kids to “protect themselves.”

Her mother, children’s book author Lori Orlinsky, estimates the effort has created roughly 8,000 bracelets, most of them made by Hayley. The fundraiser has been a family project: A 4-year-old sister helps organize the bands by color and both parents help mail the finished products nationwide.

Family friend Alysson Bourque, who lives in Sunset, Louisiana, purchased some before joining the project, looping bracelets with her own children.

“We were excited that bracelets were a symbol of hope and goodwill and brought people together in a time where people feel disconnected,” said Bourque, who also writes children’s books.

Others have pitched in, too.

Over the summer, Hayley introduced the idea at Apachi Day Camp, a summer program she’s attended for years. After Hayley’s pitch, campers of all ages were on board.

“It just became a thing that everyone wanted to do,” said Beth Miller, a camp director. “It bonded the kids.”

Hayley, who loves gymnastics and dancing, makes bracelets throughout the day, between online classes and often while watching television or listening to Taylor Swift and Kelly Clarkson. Sometimes her hands get sore.

“I need a manicure,” she said.

Her high-profile donors include Chicago Mayor Lori Lightfoot and actor Miguel Cervantes, who played the lead role in the Chicago production of “Hamilton” and has appeared in plays in New York. The White Sox recognized her at a game.

Hayley, whose experience in sales includes selling the most cookies in her Girl Scout troop, has no immediate plans to stop making bracelets. The entrepreneur is continually dreaming up ways to bring in more money. She’s done holiday themed-bracelets, sports teams colors and red and light blue bracelets to represent the Chicago flag.

“I want to do it until coronavirus is over,” she said. “It feels like I’m helping a lot of people.”