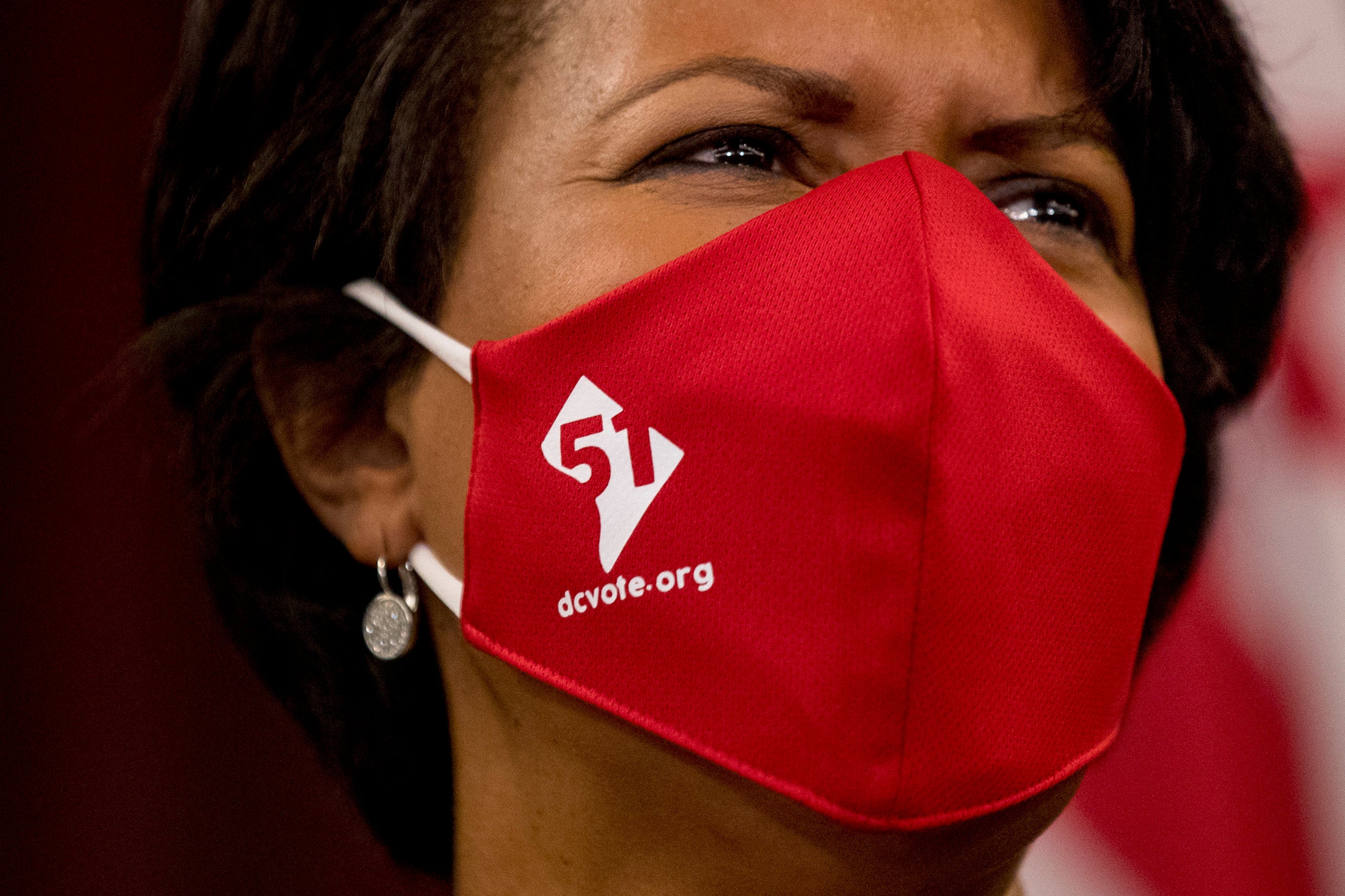 FILE - In this June 16, 2020, file photo District of Columbia Mayor Muriel Bowser wears a mask with the number 51 over a map of the District of Columbia during a news conference on D.C. statehood on Capitol Hill in Washington. Bowser must pull off a public juggling act as the city budget becomes a battleground for the country's debate on overhauling law enforcement. (AP Photo/Andrew Harnik, File)
by: ASHRAF KHALIL Associated Press
Posted: Jun 28, 2020 / 09:46 AM EST / Updated: Jun 28, 2020 / 09:54 AM EST

WASHINGTON (AP) — Muriel Bowser’s national profile had never been higher, thanks to a Twitter beef with President Donald Trump and a renewed push to turn the nation’s capital into the 51st state. Now Washington’s mayor must pull off a public juggling act as the city budget becomes a battleground for the country’s debate on overhauling law enforcement.

An activist collective led by Black Lives Matter is trying to capitalize on shifting public opinion, and the demands include major cuts in funding for the Metropolitan Police Department. The District of Columbia Council had indicated it would push for up to $15 million in cuts, but Bowser is defending her 2021 budget proposal, which includes a 3.3% increase in police money.

With conservatives painting her as a radical riot-supporter, Bowser must thread this needle with both Black Lives Matter and the White House watching her every move. It’s a similar dilemma to that faced by other urban mayors of protest hot spots who must balance competing pressures without alienating either the activists or the police. In Los Angeles, Mayor Eric Garcetti has faced criticism for not going far enough on law enforcement changes while the police union has called him “unstable.” In Atlanta, Mayor Keisha Lance Bottoms is dealing with mass police no-shows over her handling of police violence cases.

Bowser is also finding herself one of the public faces of Washington’s quest to be a state. The House of Representatives on Friday, voting largely along party lines, approved a bill to grant statehood. It was the first time a chamber of Congress had approved such a measure.

But there is insurmountable opposition in the GOP-controlled Senate, where Sen. Tom Cotton, R-Ark., singled out Bowser out on Thursday as a reason that Washington cannot be trusted with statehood. He called her “a left wing politician … who frequently takes the side of rioters against law enforcement.”

Cotton lumped Bowser in with the late Marion Barry, a former mayor who was caught on video smoking crack cocaine in a 1990 FBI sting. Barry, who died in 2014, remains a beloved figure in many parts of the district and he emerged from federal prison to serve additional terms as both a mayor and a councilman. A statue of him was erected in front of the D.C. government administration building in 2018.

In the early days of the protests, Bowser publicly sided with the demonstrators as Trump usurped local authority and called in a massive federal security response. Bowser responded by renaming the protest epicenter, within sight of the White House, as Black Lives Matter Plaza. She also commissioned a mural with Black Lives Matter painted on 16th Street across from the White House in yellow letters large enough to be seen from space.

For Trump and his supporters, Bowser may as well have declared herself a dues-paying member of the movement’s local chapter. But that chapter didn’t feel the same, immediately dismissing it as “a performative distraction” from true policy changes.

“It’s a stunt. It was always a stunt,” said activist Joella Roberts. “We don’t need a street sign to tell us we matter. We’re here in the streets because we already know we matter.”

April Goggans, a core organizer with Black Lives Matter DC, rejected Bowser’s moves as “taking advantage of national attention,” and added, “She would never even say the words ‘Black Lives Matter’ until recently.”

Bowser acknowledged that mistrust even as she ordered the changes.

“Black Lives Matter is very critical of police. They’re critical of me,” Bowser said, not long after hanging the new street sign. “That doesn’t mean that I don’t see them and support the things that will make our community safe.”

The street mural in particular became the subject of a cat-and-mouse game that underscores the complexities of Bowser’s position.

The original mural also bore a yellow outline of the D.C. flag — two horizontal lines topped by three stars. Within days, activists had erased the stars to create the appearance of an equal sign and added their own message, turning the mural into “Black Lives Matter=Defund The Police.”

Clearly not wanting to antagonize the street activists, Bowser’s government has allowed the “Defund the Police” addition to remain. But city crews did repaint the stars on the D.C. flag image.

Now that struggle moves into the district’s decision-making corridors as Bowser finds herself caught between the D.C. Council, street pressure from a resurgent activist community and her own police department.

Relations between the City Council and the police are already fragile thanks to legislation that was quickly and unanimously passed on June 9. It prohibits police from using tear gas or riot gear to break up protests, bans the use of choke-holds, strengthens disciplinary procedures and speeds up the release of body camera footage and names of officers involved in fatal shootings.

Both Bowser and the police chief, Peter Newsham, were critical of the move, saying lawmakers reacted rashly to public pressure and did not consider enough input before passing the measure. A local TV station obtained a recording of Newsham telling fellow officers that the department felt “completely abandoned” by the D.C. Council.

A new showdown is looming over the 2021 budget. Council member Charles Allen, head of the Committee on the Judiciary and Public Safety, said the committee received 15,000 calls, messages and video testimonials before a budget hearing this month — an exponential increase in interest from previous years. A draft report from the committee reportedly includes up to $15 million in proposed cuts to the police budget.

Bowser on Thursday said that she hadn’t read the police funding proposal yet and would wait until the Council formally submitted its proposed changes to her. She insisted that her 3.3% increase — bringing the total police budget up to $533 million — was the correct assessment of what was needed to keep the city safe.

“We sent them the budget that we need,” she said.

Goggans, the local Black Lives Matter organizer, dismissed the budget dispute as a facade, saying that the proposed cuts amount to far less than they seem.

“There’s not a compromise to made on our side. That just can’t happen,” Goggans said. “We’re going to keep putting up a massive amount of pressure and escalating our tactics and intensity.”