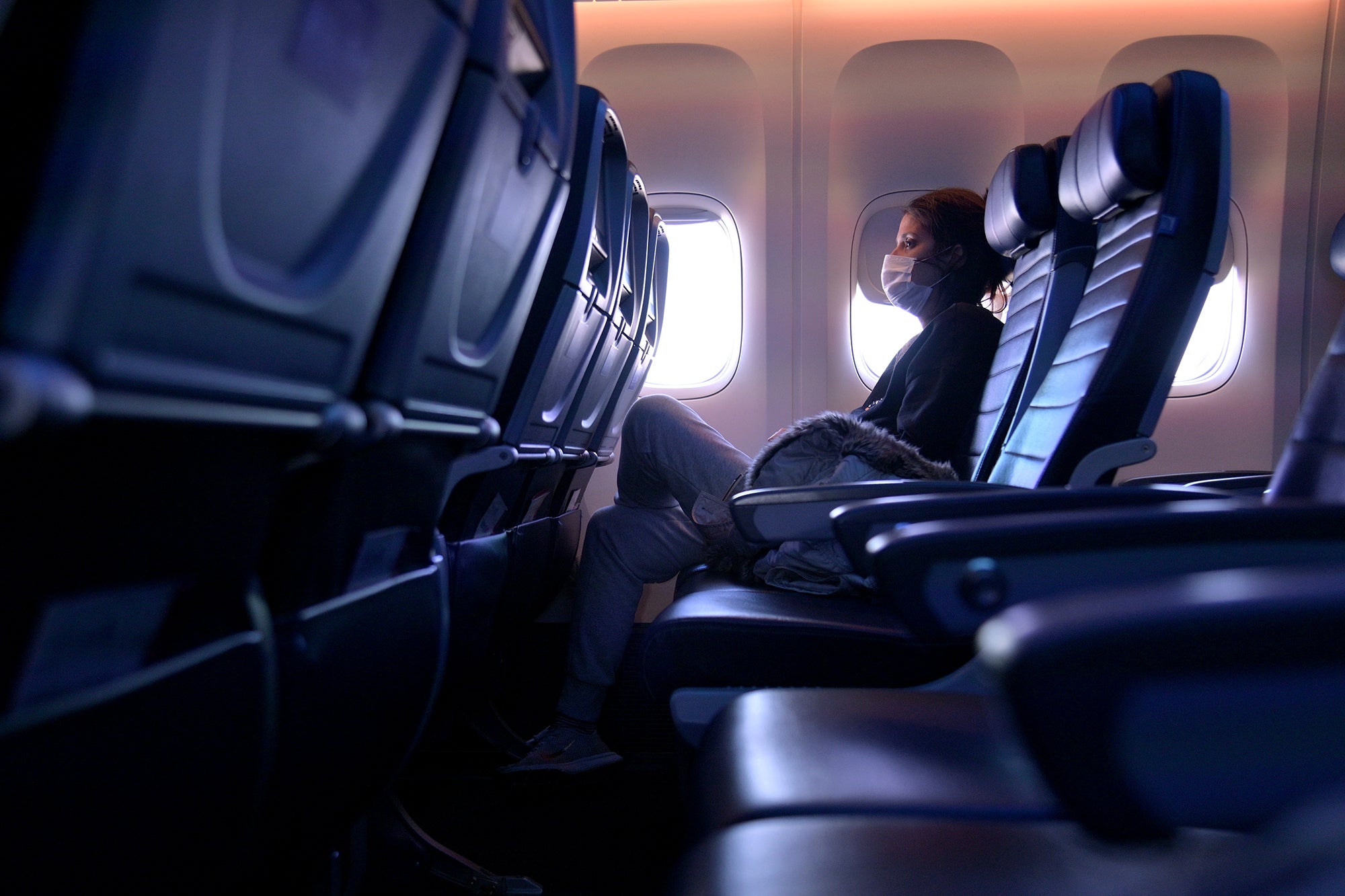 IN FLIGHT - OCTOBER 27: A masked passenger is seen seated on a flight from San Francisco, California to Newark, New Jersey on October 27, 2020. Although virus dissemination on flights is low when people are able to be socially distant, the extremely hard hit airline industry is having to consolidate flights, furthering complicating the dilemma. (Photo by Michael Loccisano/Getty Images)
by: Chris Isidore, CNN Business
Posted: Nov 19, 2020 / 12:25 PM EST / Updated: Nov 19, 2020 / 12:25 PM EST

(CNN) — The spike in COVID-19 cases is starting to hit air travel once again, according to United Airlines.

United warned in a filing Thursday morning that it has seen a drop in bookings and a rise in canceled reservations, which it attributed to increased infection rates across the country.

The airline also may have to trim its schedule even more deeply in the fourth quarter, beyond the planned cut of 55% compared to a year ago.

The number of US COVID-19 cases is rising rapidly, reaching record levels in the last week. There were 170,000 new US COVID-19 infections reported Wednesday, as the number of US deaths crossed the 250,000 mark. Many states are reimposing restrictions on business and social activities.

And although US airlines are expecting their busiest week since March ahead of the Thanksgiving holiday, many public health authorities are urging people to limit their travel and exposure to older relatives.

United was the first US airline to cut back its domestic schedule in March when the initial US outbreak first started affecting air travel. Soon, all airlines followed suit with deep cuts to schedules as the amount of air travel plunged.

When the pandemic hit earlier this year, airlines suspended the change fees they typically charge. In September they dropped the change fees permanently. That made it easier for passengers to cancel reservations, but customers generally only get a credit, not a refund, when they cancel travel plans.

Two of United’s major rivals have also reported slow downs in bookings recently, although neither mentioned a rise in reservations being canceled.

Vasu Raja, the chief revenue officer at American Airlines, the world’s largest carrier, told investors at a conference Tuesday that his airline also has “definitely seen a flattening of ticket sales.”

“It’s been nowhere near to the kind of negative effects we saw either in July or in the March-April period,” he said. “But now we’re at a place where we can absolutely anticipate it and plan a network … around that. We’ve seen it.”

American said it is still adding flights next week for Thanksgiving, going from about 3,500 per day to more than 4,000.

Southwest pointed to guidance last week in which it said it has experienced a deceleration in improving revenue in recent weeks for the November and December period.

“It is unclear whether the softness in booking trends is…a direct result of the recent rise in COVID-19 cases,” the airline said at that time. “As such, the company remains cautious in this uncertain revenue environment.”

Delta, the other major US airline, did not immediately respond to questions about United’s filing.

Shares of United were down nearly 2% in midday trading, while other airline stocks were little changed.