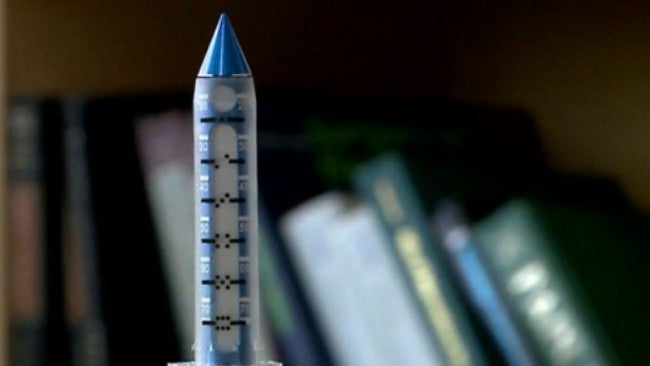 “We’re trying to look for ways that we can get in and out of the brain rapidly and efficiently without causing additional damage to the brain,” said Dr Mitesh Shah, the president of Goodman Campbell Brain & Spine.

Dr Shah is one of four surgeons in Indiana, and just 1 out of 50 in the country, trained to use the Nico Brain Path.

“By putting this tip through one of the sulcuses we can prevent damaging the cortex itself,” said Dr. Shah. “It has a suction tip in the bottom and a mechanical tool that cuts up the clot and we asperate the clot as we remove it closely.”

Dr. Shah performed the surgery 3 months ago on Michelle Downes of Canada. She was in Indianapolis showing her dog at the convention center when she suffered a stroke.

“I know I wouldn’t be functioning the way I am,” said Downes. “I don’t know if I’d even be able to answer this question, or if I would be alive.”

The day after the surgery she had gross movements in her arms. Three days afterwards she had fine finger movements.

Downes was out of the ICU within 5 days, and back to Canada where she was able to start rehab.

“Honestly, it was a stroke of luck that the only way to describe what happened,” said Downes.

Dr. Shah says the minimally invasive procedure allows them to get to clots that are deep in the brain without damaging it.

Downes she says the only pain she is still experiencing is where doctors had to cut into her skull.

Dr. Shah said in ideal situations they like to perform the surgery within 8 hours of the stoke occurring.