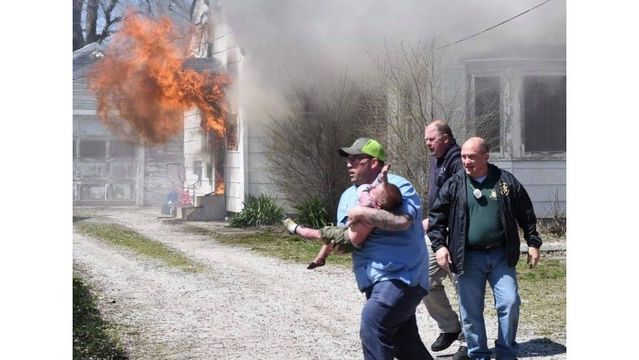 FORT WAYNE, Ind. (WANE) — An off-duty Bluffton firefighter came to the rescue to help a child get out of a house, when a fire broke out in a home Tuesday.

The fire happened on Bond Street in Bluffton around 1 p.m. Tuesday. When crews arrived on the scene, fire was coming from the one side of the house.

An off-duty Bluffton firefighter was also running out of the house with one of the children. Fire crews were able to go in and get the second child out.

“It’s second nature for us to go in a fire, obviously going into a fire without our personal protective items is scary, so for him to be able to do that is just amazing.” Bluffton Fire Chief Don Craig said.

The grandparents, who were in the bedroom, were alerted to the fire. When they came out, the smoke and fire was too intense so they went out a window.

The two kids were in another room and had been put down for a nap. The grandparents had planned to go in to get the children, but the fire crews were able to rescue them.

The two children were taken to Riley to be treated for smoke inhalation and thermal burns.

Two civilians driving by stopped and tried to go into the burning home to help the kids get out safely.

“We’re not heroes we’re just passerbys that just happened to be in the right place at the right time, the real heroes are the ones that do it every day,” said Seth Chaffins.