Pence ‘grateful’ for expressions of support for religious freedom law 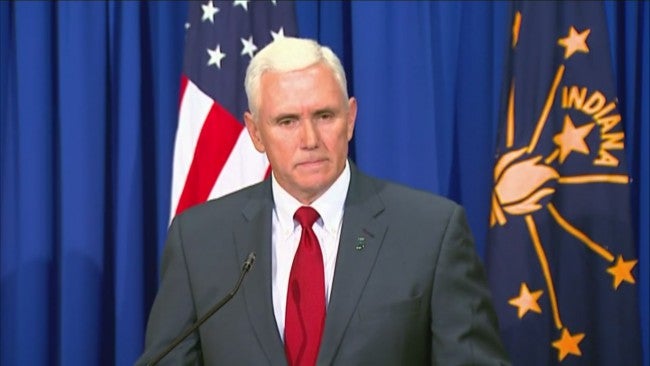 INDIANAPOLIS (WISH) – During a press conference Tuesday, Governor Mike Pence expressed disappointment over what he called “gross mischaracterizations” and “reckless reporting” early on about Indiana’s religious freedom law. And despite a firestorm of national criticism, he told reporters he also thought it has begun to improve.

“We’re making progress on that. I think we’re turning back, I’m grateful for the expressions of support that are being given from around the country including many in the media that are articulating what this is all about and we’ll continue to move forward,” Pence said.

“This is simply allowing people of faith space to be able to express their beliefs – to be able to be people of conscience,” he said. “I think once the facts are established, people aren’t going to see this as discriminatory at all.”

Rick Santorum sent a tweet saying “I stand with @mikepence4gov in defense of religious liberty and real tolerance.”

I stand with @mikepence4gov in defense of religious liberty and real tolerance. Will speak about this at GW tonight. http://t.co/TDPWHw91pL– Rick Santorum (@RickSantorum) March 30, 2015

A spokesperson for Wisconsin Governor Scott Walker said the governor backs the principle of the measure and supports religious freedom rights.

Others also spoke out in support.

“Across the country whenever same-sex ‘marriage’ is imposed by courts, lawsuits and punishment soon follow for people of faith who cannot compromise their beliefs about the truth of marriage and do not wish to participate in a same-sex ceremony,” said Brian Brown, president of the National Organization for Marriage in a statement. “(The law) in Indiana will at least give Hoosiers the opportunity to raise a defense in court to combat this kind of harassment and discrimination by governmental entities.”

Family Research Council President Tony Perkins also issued a statement saying in part: “Indiana has been the target of misinformation, and bullying in both the media and online, simply for joining 19 other states in aligning themselves with the federal religious freedom law. What is unfolding in Indiana reveals the source of true intolerance: those who want the government to punish people for freely living according to their belifes.”

Critics of the law maintain it opens the door to discrimination and claim that some other states that have enacted similar legislation also have antidiscrimination laws that include sexual orientation and gender identity, something Indiana does not.