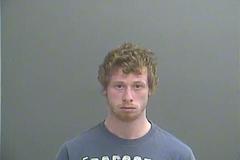 An off-duty officer noticed a 2001 Ford Focus that looked suspicious. The driver of the Focus passed a stop sign and two other cars before finally pulling over for the officer to question him.

The driver of the vehicle was identified as Dustin Perry. He had three other adults and a one-year-old child in the car.

The officer determined that Perry never had a driver’s license, and he had an active felony warrant against him from Martin County.

Perry was taken into custody at Knox County Jail where he was being held on Saturday. The other four car passengers were released.