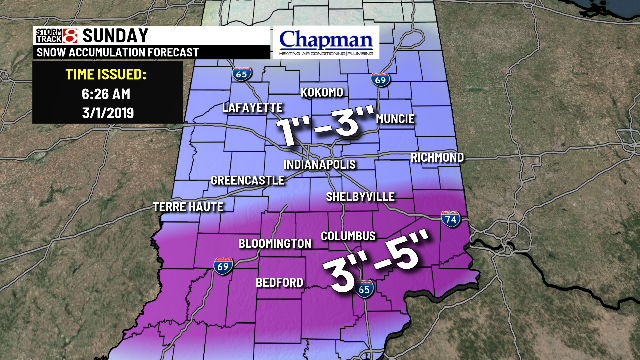 INDIANAPOLIS (WISH) – A quiet and cold start to March! Highs for Friday will warm to the lower 40s in the afternoon with mostly cloudy skies. Friday night low temperatures will fall through the 30s and bottom out in the upper 20s.

Saturday will be the better of the two days of this weekend. Partly sunny skies are expected through most of the day with highs in the lower 40s. Sunday a winter system will impact the state of Indiana. Snow will spread in mid to late morning and steadily fall through the day. A heavy band of snow will set up in southern Indiana with higher snow accumulations south of I-70.  Most spots will see 1-3” of snow while areas in southern Indiana could see 3-5” of snow. Snow will wrap up late Sunday evening. Highs during the day on Sunday will cool to the lower 30s.

After the snow moves out, much colder air moves in. Highs for the first full week of March will be running a good 20° colder than normal with highs in the lower 20s through Tuesday afternoon. Next chance of snow arrives by the end of the week next week with highs rebounding to the 30s.