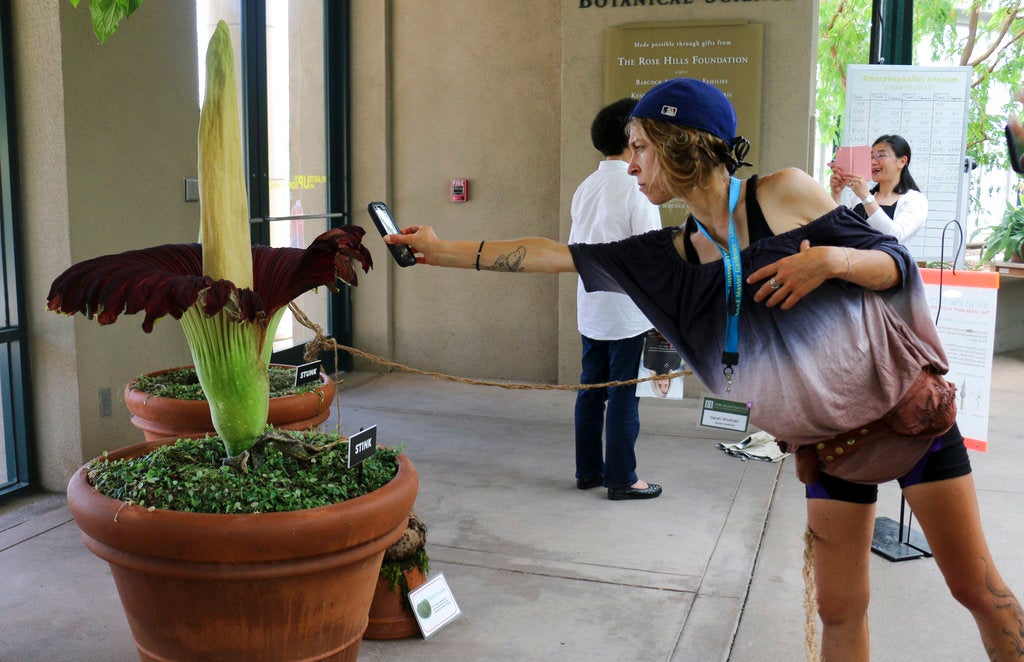 SAN MARINO, Calif. (AP) — Visitors were flocking to the Huntington Library in Southern California on Friday to get a whiff of a so-called corpse flower, known for the rotten stench it releases when it blooms.

“We thought we had a few more days to go. But it was ready, and it was pretty spectacular,” she said. “The great thing about these flowers is they’re so unusual-looking and have this reputation for smelling really bad. It gets all kinds of people really interested in botanical science. It’s just a charismatic plant.”

The foul odor the plants emit attracts insects for pollination. The plants don’t emit the foul odor until they bloom.

“It smelled like rotting meat or decaying rats or gym socks,” said Brandon Tam, an orchid specialist at the Huntington.

The scent decreased on Friday afternoon as the flower started to close back up. “But if you are close enough, you’ll be able to get a little whiff of it,” Tam said.

“Stink” is the sixth corpse flower to bloom at the institution in suburban San Marino. The last was on Aug. 23, 2014.

The plant is one of the three corpse flowers expected to bloom within the next week. The two other flowers, nicknamed “Stunk” and “Stank,” should bloom in the next few days, Blackburn said.

“This is the first time the Huntington is going to bloom total of three in one season, which is quite rare,” Tam said. “It is a surprise to see we have three all at once.”

The Huntington is seeing more visitors than normal. More than 500 Huntington members flocked to the Huntington Library to view the blooming on Thursday night, Tam said.

“I’ve known about the corpse flower since the first time I saw it in 2009. So every time I hear about it about to bloom, I want to come and see it,” visitor Jeannette Hollyday said.