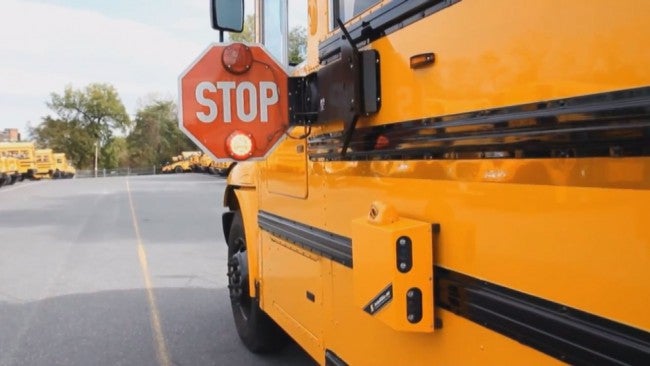 FORT WAYNE, Ind. (WANE) – If some state lawmakers get their way, schools could soon use cameras to catch and fine drivers who ignore school bus stop arms. But the Allen County prosecutor worries the process could be unconstitutional.

But the same year, only 406 drivers pleaded guilty to illegally passing a school bus. The staggering disconnect, because officers can only cite violations they see firsthand-something that’s grabbed the attention of state lawmakers.Stop arm cameras

State Representative Milo Smith (R-Columbus) co-authored a new bill that aims to catch and punish more stop arm violators. It authorizes school corporations to enter into an agreement with an outside company. The company will install cameras on the outside of buses that will snap pictures of vehicles in violation.

“If we authorize them to enter into a contract with a third party company, there’s no up front cost for [the school district],” he explained.

Under the proposed bill, once the stop arm camera captures evidence of a violation, the bus driver has to write a report on the incident. From there, an officer will review and confirm the offense.

Within 10 days, the owner of the vehicle will be sent a citation in the mail. If the owner wasn’t driving the vehicle at the time, he/she will have to respond with the name and address of the driver who was.Potential profit for school corporations

Fines within five years of a citation would be as follows:

“A lot of school corporations are strapped for cash for their transportation,” Smith said. “So what if they’re able to raise a little more revenue and they use it in the transportation department? But we also stop people from running stop arms.”

Under the bill’s requirements, the company that installed the cameras will get up to 25 percent of fines collected. The rest of the revenue will be split between the Spinal Cord and Brain Injury Fund and the school district.

The proposed allocation of fines could pose a problem. American Traffic Solutions is an Arizona-based company that installs cameras on school buses. Charles Territo, spokesperson, said the company usually collects between 50 and 75 percent of fines.

Territo told 15 Finds Out the company has installed about 500 cameras on buses in six states (Washington, Texas, Georgia, Illinois, Maryland, and Virginia).Taking the bus driver’s word for it

The stop arm camera bill has only been introduced on the house side. But one in the state senate has passed a committee.

State Senator Eric Bassler (R-Washington) authored a bill that’s focused on handing out more severe, misdemeanor charges for stop arm violators. Under his bill, the bus driver’s report will be enough to charge an offender.

“They could then be cited without the police officer actually seeing the event,” Bassler said. “Ultimately where it would come down to is a person would go before a judge, just like in many other situations, and the judge would hear both sides of the case and make a determination.”Tough to prove

Allen County Prosecutor Karen Richards thinks solely using a bus driver’s report against a driver will be a tough sell toward a judge.

“Your misdemeanor is going to be very tough to prove,” she said. “And then it has to go through our office. And the probable cause has to be found by the judge before we can arrest somebody. And a judge is not going to find probable cause under those circumstances.”

When it comes to mailing tickets based on a pictures of someone’s license, Richards thinks the process could be unconstitutional. Authorities have to prove who commits an offense, and the owner of the vehicle might not have been the one driving at the time of the violation.

“Who’re you going to charge if you can’t identify the driver?” she asked. “You can’t give a ticket to a car. You’re giving a ticket to a driver and you have to be able to figure out who the driver is.”

Fort Wayne Community Schools has recently cut bus routes as part of a $2.5 million budget deficit in the transportation department. When asked about the stop arm camera bill’s potential to save lives and bring in more money, FWCS leaders told 15 Find Out they’ll take a look at the option if the bill passes.

15 Finds Out will continue to follow each of the stop arm bills and will have updates as soon as they become available.