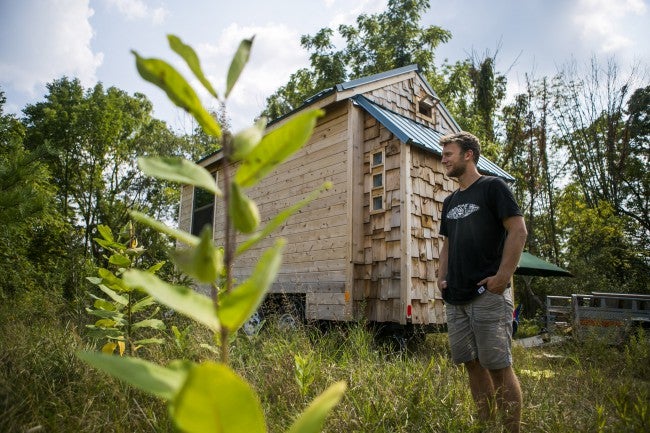 ANN ARBOR, Mich. (AP) – A University of Michigan computer science junior has moved into a 170-square-foot home he built himself.

Christopher Cerk, 21, loaded the tiny house on a trailer and hauled it with him for the start of fall classes, The Ann Arbor News reported Saturday.

Cerk is not revealing the location because the small size could violate local rules. Ann Arbor city ordinance requires homes to be 450 square feet or more, according to the newspaper.

“Around freshman year I didn’t enjoy living in the dorms so I wanted to do something different,” he told the newspaper. “I started researching different ways to live. I wanted to put all the money that would be going towards rent … to something else.”

It cost Cerk about $800 a month for rent last year.

He spent $13,000 on materials and built the house over the past two years. He expects to save money over his last two years at Michigan, and said he has a place to live after graduation.

The house features a compostable toilet, shower and two 100-watt solar panels that are expected to supply enough juice to charge his cellphone and laptop, provide lighting and power for a cook-top stove. It also has a propane heater.

“Living off the grid will be interesting because I’m not hooked up to anything, but I think it’ll be all right,” he said. “I have an adventurous personality and I’m very ambitious. … I think it’s just a good step for people to go toward – using space more efficiently and living in a more purposeful and simple way.”

Efforts to build smaller houses is gaining interest elsewhere, but are pitted against local size rules. Supporters say they are cheaper to build and less costly to maintain. But detractors say they can be fire hazards and may reduce the value of nearby homes and property.