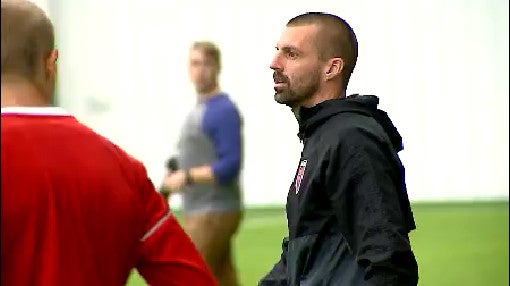 WESTFIELD, Ind. (WISH) — For the first 11 matches of the Indy Eleven season, the North American Soccer League did not recognize the team that made the championship match just one season ago.

Marred by injuries and poor execution on the pitch, the 2016 spring champions went winless for nearly two months. Then in early June, a blown two-goal lead at San Francisco left the Eleven in the Bay Area at rock bottom.

“We came together as a group, had a heart-to-heart and agreed we were the only ones that could dig ourselves out of it,” forward Colin Falvey said.

A players-only meeting cleared the air and the Eleven finally got healthy. The result was four wins and 13 points over the final five games to climb back into championship contention for the fall.

“We said in that last game of the spring against Jacksonville, let’s start the fall now,” head coach Tim Hankinson said. “Let’s not wait until Edmonton and the official start of the fall; let’s start this week.”

“The last five games we’ve shown that we can compete with some of these teams that are in front of us,” forward Justin Braun said. “We just needed to get healthy.”

The club’s compass through this rocky season has been goalie Jon Busch. With 18 years on the Eleven’s youngest player, Busch has seen it all over his 21-year professional career which included a 14-year run in Major League Soccer.

“To me, it was almost like a hangover; we weren’t as hungry as we were last season and we needed a kick in the butt,” Busch said. “That is what we got in the first 10 games.”

With four shutouts during the spring season alone, Busch is playing himself out of any potential retirement talk. The 40-year-old said he will make a decision on his playing future after this season and, in the meantime, his teammates continue to remind Busch just how ancient he is.

“I love the one where we joke, he is so old he actually saved a penalty from Pele in a professional game,” Falvey said. “I always get a chuckle out of that one.”

This works both ways, as Busch tries to explain to the rest of the roster what life as a professional soccer player was like in the mid-1990s.

“I first try to explain what Nintendo is to them,” Busch said. “Then I bring up that, at the beginning of my career, I didn’t even have a cellphone. I was calling my wife collect from pay phones on the road.”

After posting the second-most saves in the league in the spring, Busch can tell these jokers to zip it.