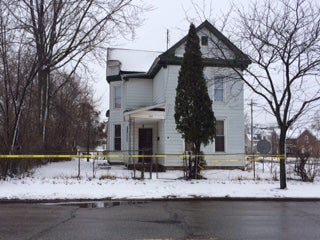 The bodies of Mohamedtaha Omar, 23, Adam K. Mekki, 20, and Muhannad A. Tairab, 17, all of Fort Wayne, were found by police inside a home in the 800 block on East Lewis Street on Wednesday. The coroner’s office said each died of gunshot wounds and ruled their deaths homicides, the second, third and fourth of the year.

The coroner’s office would not say how many times the victims were shot but Police Chief Garry Hamilton said later Friday that each was shot “multiple” times. Public Safety Director Rusty York said they were shot “execution style.”

Fort Wayne police were called just after 5:30 p.m. Wednesday to the the white, two-story home between Francis and Harmar streets and found the three dead inside a single ground-level room of the home.

Hamilton said Thursday that Omar, Mekki and Tairab were not known to be associated with any gang activity but said it was too early to say if their deaths were gang-related.

Hamilton said the three did not live at the home, which he described as a hang-out spot. All three had different addresses and were not believed to be related.