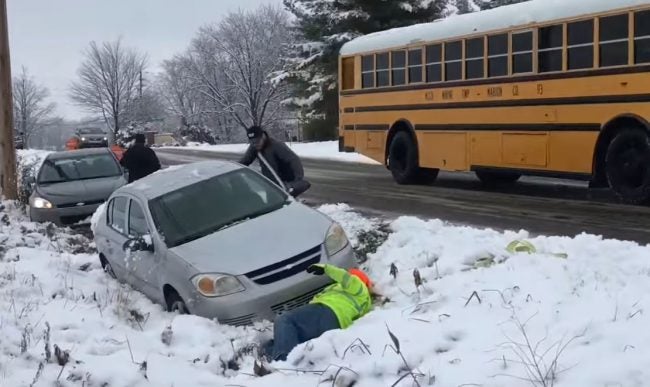 INDIANAPOLIS (WISH) –  A viral YouTube video of cars sliding off the road and colliding near a Comcast work site has sparked an investigation from the state.

A spokesperson for Indiana Occupational Safety and Health Administration said the state agency received a complaint related to the video and is conducting a safety investigation. The spokesperson declined to discuss specifics of the investigation.

The video shows a black truck sliding into another car on West Morris St. while a Comcast crew blocks part of the road as they work.  It also shows cars sliding off the road. A man behind the camera urges Comcast workers to put more cones on the road. A worker tells him they’re following standard procedure: at least one cone for every ten miles per hour in the speed limit.

More than 100,000 people watched the clip online by Wednesday morning. One woman who spoke with 24 Hour News 8 said she saw the incidents unfold in person.

Her snowy front lawn is covered in tire marks after, she said, a truck slid off the road and nearly hit her parked car.

“We were watching out the window,” she said. “I was nervous about them hitting my car but, at the time, I was just hoping that all the other drivers were okay.”

Marchetti released a statement saying in part, “Within the next 24-48 hours, my team leaders will meet with our technicians across our company to use this as an example of how important it is to make everyone’s safety a priority in everything we do.”

A spokesperson for the Indianapolis Metropolitan Police Department said the Comcast workers followed Department of Transportation standards. Police also said at least one car in the video appears to be going too fast for the icy roads.

IMPD said they did not cite anyone.

Angela Beaver said she watches cars speed by her Morris St. Home every day. She wishes they’d slow down but, in this situation, she said drivers should have had more warning.

“The cones should have been moved up so people going west on Morris St. would have been able to see that there’s work going on down there.”

The man who posted the video, whose YouTube username is Amish Hacker, declined an interview with 24-Hour News 8.

The video had close to 100,000 views and thousands of comments in less than 24 hours. It was featured on the front page of Reddit.