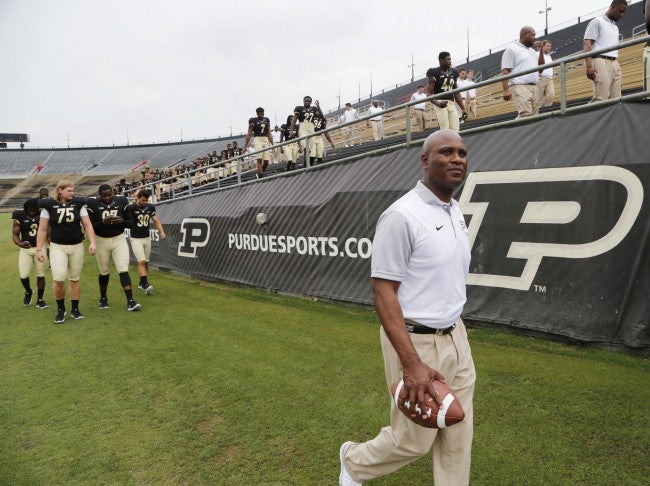 WEST LAFAYETTE, Ind. (AP) – Darrell Hazell sees a difference around Purdue this season. He hears it, too.

For the first time under their third-year coach, the Boilermakers are walking and talking like a team ready to make a move in the Big Ten West.

“I think our guys are starting to talk the way they’re supposed to talk, supporting each other, and making sure that they’re a very confident, quiet, confident team,” Hazell said. “It’s a great feeling to have after 2 1/2 years to finally have the locker room where you want it to be.”

The next step, of course, is to start producing results on the field. Hazell has won only four games, just one in conference play, in his first two seasons with the Boilermakers. And he’s 0-2 against Purdue’s biggest rival, Indiana.

At first glance, it may not seem much has changed this season. There’s another quarterback battle brewing, another young roster and a seemingly endless bundle of questions.

But to get things righted at Purdue, Hazell knew he first had to instill a sense of team unity and discipline. With that foundation, Hazell can start putting the other bricks in place.

He believes the Boilermakers are improving along the offensive and defensive lines and that a good start will create the kind of momentum Purdue so desperately needs. And when things go wrong, Hazell insists the players can sort them out.

“There’s such great leadership that’s starting to emerge, not only from our senior class but if you look at (sophomore) Ja’Whaun Bentley, one of our linebackers, who really stepped up and has taken on a leadership role,” Hazell said. “They police themselves so the coaches don’t have to police them.”

All the Boilermakers have to do now is prove those changes off the field will make a different on it.

Here are some other things to watch at Purdue this season: