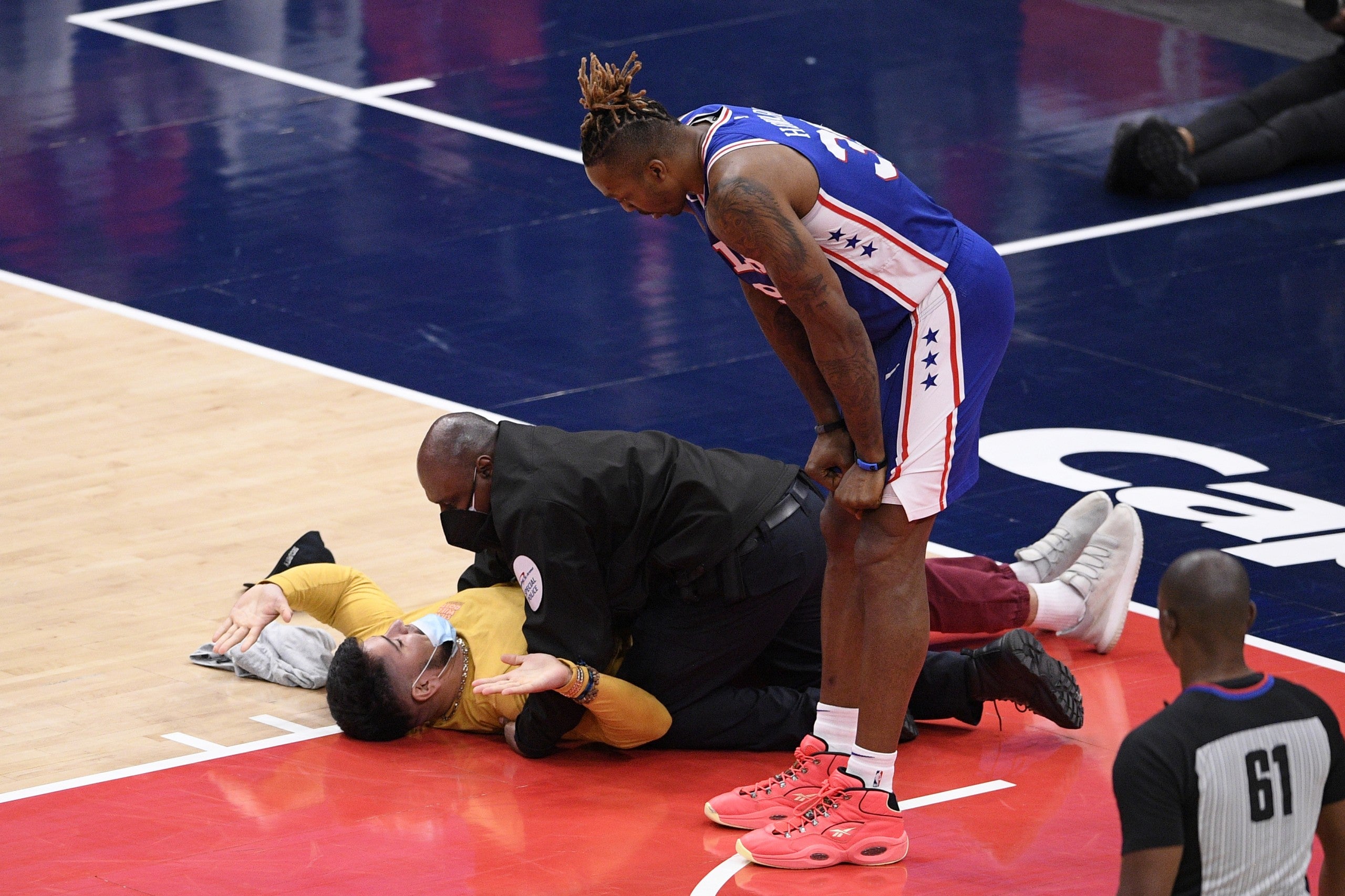 Philadelphia 76ers center Dwight Howard (39) watches as a fan who ran onto the court is restrained by security personnel during the second half of Game 4 in a first-round NBA basketball playoff series against the Washington Wizards, Monday, May 31, 2021, in Washington. (AP Photo/Nick Wass)
by: HOWARD FENDRICH AP Sports Writer
Posted: Jun 1, 2021 / 04:30 AM EST / Updated: Jun 1, 2021 / 04:31 AM EST

WASHINGTON (AP) — A fan was tackled after running onto the court during an NBA playoff game between the Washington Wizards and Philadelphia 76ers on Monday night, the latest example of unruly behavior as teams let more spectators in the stands during the pandemic.

“You can tell those people have been in some sort of captivity for the last year, year and change, right?” Wizards center Robin Lopez said. “It’s kind of wild to see the liberties people are taking.”

The players were heading toward Washington’s basket in the third quarter of the home team’s 122-114 victory in Game 4 of the Eastern Conference first-round series when the action was halted because of the intruder, who jumped as if pretending to try to dunk.

A security guard grabbed and held down the person near the baseline as 76ers center Dwight Howard stood nearby.

The fan was escorted away from the court and play resumed after a brief interruption.

“I don’t know what he was trying to do,” Washington forward Rui Hachimura said. “I think they’re just excited to come back. But they’ve got to be more respectful of us as players. They think they can do whatever they want.”

After beginning this season with zero spectators allowed at its arena, Washington has steadily increased the capacity to the point where Monday’s contest had an announced attendance of 10,665, roughly 50% of what the place holds.

“The stuff that’s been happening over the last week — we all know that fans shouldn’t be doing that stuff. That shouldn’t happen during the game,” Wizards All-Star Bradley Beal said. “Just sit there and enjoy the game or stay home and watch it on TV. We’re fortunate nobody got hurt.”

During this series, Washington guard Russell Westbrook had popcorn dumped on him as he walked to the locker room after getting injured in Game 2 at Philadelphia.

“I don’t know what’s going on with these fans right now,” Sixers coach Doc Rivers said. “We’ve just got to have safety.”

On Sunday in the Celtics-Nets series, Brooklyn guard Kyrie Irving was nearly hit by a bottle thrown from the stands during a game in Boston.

Earlier, in New York, a spectator spit at Atlanta’s Trae Young as he prepared to inbound the ball during the Knicks-Hawks series.

Three fans were banned in Utah after Grizzlies guard Ja Morant said they “just went too far” with him or his family.

“It’s unacceptable,” Brooks said. “I’m tired of it. We all deserve better.”