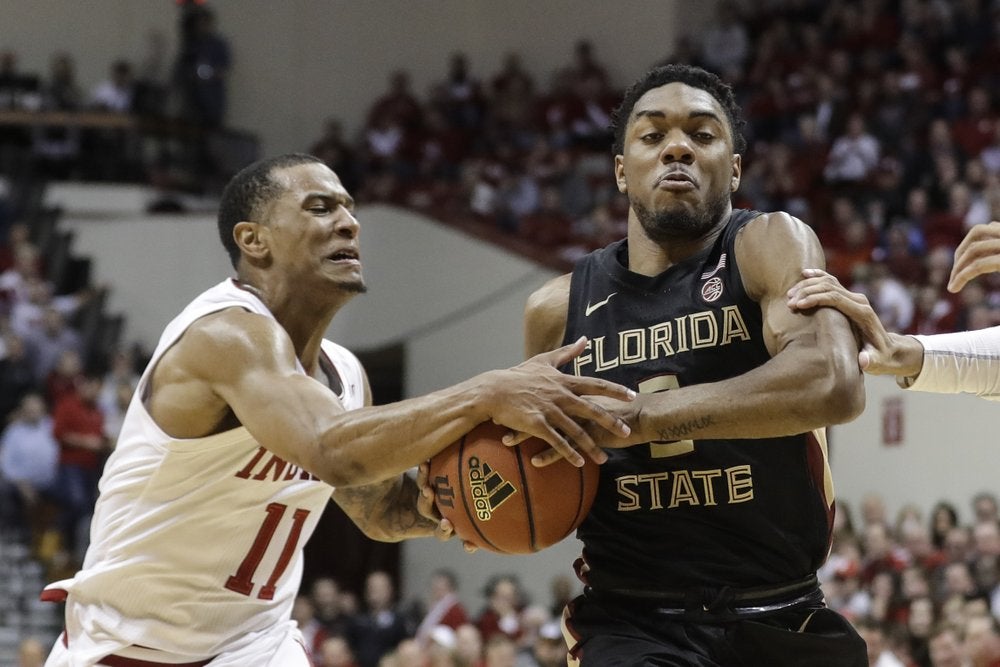 He made sure everyone knew it, too.

The senior scored a career-high 30 points, knocked down five 3-pointers and helped fuel a late spurt with two big shots to lead the undefeated Hoosiers past No. 17 Florida State 80-64 in the ACC/Big Ten Challenge.

“It’s something you just feel, I can’t explain it,” Green said. “Shots were dropping tonight, so I guess I had the hot hand.”

There was no guesswork about it.

Green went 10 of 15 from the field, 5 of 7 on 3s and 5 for 7 at the free throw line. He also grabbed six rebounds and finished with three assists and two steals — not bad for someone who missed Indiana’s first three games with an injured hamstring.

With Green back, the Hoosiers (8-0) are off to their best start since 2012-13. They earned their third straight win over a ranked team dating to last season and head into Big Ten play with a boost of confidence.

It wasn’t just Green, either. Freshman forward Trayce Jackson-Davis had 15 points and eight rebounds, while junior Justin Smith chipped in with 14 points and five boards.

Clearly, though, the difference was Green.

“He had one of those nights,” Florida State coach Leonard Hamilton said. “Tonight was his night.”

After Indiana took a 15-point lead in the first half, the Hoosiers watched Florida State methodically cut into the deficit.

When the Seminoles opened the second half with three successive 3s in less than two minutes, Indiana’s lead was down to 47-41.

That’s when Green helped spur the decisive sequence. Jackson-Davis and Smith each hit three of four free throws, Green scored on a nifty layup and hit a contested 17-footer, and Damezi Anderson closed out the 13-2 run with a 3 from the corner to give Indiana a 72-58 lead with 3:35 to go.

“Obviously, Devonte Green was special tonight,” Indiana coach Archie Miller said. “There wasn’t a whole lot of coaching that went into that.”

Florida State: The Seminoles are masters of winning ugly. But they were dreadful in the first half, getting outrebounded 17-10, going 2 of 8 on 3s and committing six turnovers. That simply left too big a hole for Florida State to dig out of.

Indiana: At times, the Hoosiers looked downright impressive. At others, they looked as though they were still trying to find their way against their best opponent of the season. Either way, it was a good win that could have long-term implications for the program.

Indiana: Jackson-Davis also had two blocks and two steals. … Indiana shot 55.6% from the field and went 7 of 15 on 3s against the Seminoles’ stingy pressure defense. … Armaan Franklin, another freshman, added nine points and four rebounds.

Florida State: “I thought they showed Indiana’s on its way back,” said Hamilton, who got a technical after the Seminoles drew a five-second call on an inbounds pass in the second half. “I thought they had an exceptional amount of energy and focus.”

Indiana: “Green light, every time,” Jackson-Davis said when asked what he thinks when Green is shooting well.

The Hoosiers play their Big Ten opener Saturday at Wisconsin.