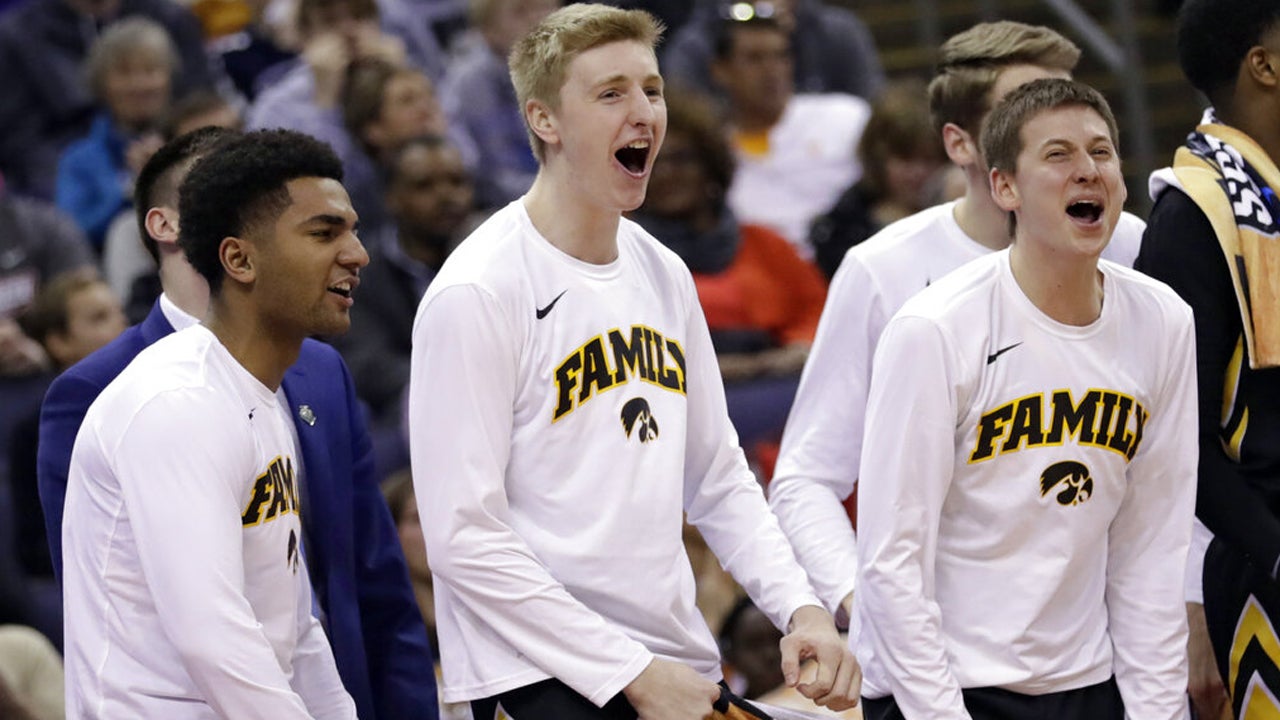 COLUMBUS, Ohio (AP) — Iowa kept up the Big Ten’s blitz through its first six games in the NCAA Tournament.

Luka Garza scored 20 points, Jordan Bohannon made a three-point play during the Hawkeyes’ closing surge, and the No. 10 seed in the South Region kept its league unblemished by rallying for a 79-72 victory over No. 7 seed Cincinnati on Friday.

Win by win, the league is backing up its brag.

“We’ve been saying all year long that it’s the most competitive league in the country, top-to-bottom,” Iowa coach Fran McCaffery said. “And you sort of expect Big Ten coaches to make those kinds of statements, but the reality is we actually believe it.

Count the Bearcats as the latest believers.

Cincinnati (28-7) won the American Athletic’s tournament and had the league’s player of the year in Jarron Cumberland. The Bearcats also had what amounted to a home-court advantage, with Nationwide Arena packed with fans that made the two-hour drive up Interstate 71.

None of it could stop the Big Ten’s tournament landslide.

“It’s tough,” said Cincinnati point guard Justin Jenifer, who had a career-high 19 points. “I didn’t picture that we were going to lose this game today.”

After trailing most of the way, the Hawkeyes (23-11) rallied late for their first NCAA Tournament win in four years . Bohannon’s big play with 1:07 left put Iowa up 73-64, and the league’s most accurate foul shooter made one of two with 18 seconds left to help finish off another shining Big Ten moment.

“That shows how powerful and strong this conference was,” Bohannon said.

The league sent eight teams into the field, the most in its history, and five won their opening games Thursday. Iowa was the first of three playing Friday along with Ohio State and Wisconsin.

For Cincinnati, it was another early flameout . The Bearcats haven’t made it past the opening weekend for seven straight years.

Jenifer kept the Bearcats in the game despite a subpar game from Cumberland, who went only 3 of 9 from beyond the arc and finished with 18 points.

Cincinnati has been an NCAA Tournament regular, but hasn’t reached the Sweet 16 since 2012. As a No. 2 seed last year, the Bearcats blew 22-point lead with 11 minutes left and lost to Nevada, matching the second-biggest meltdown in NCAA Tournament history.

And now they have a disappointing two-hour drive home.

Iowa was simply better with everything on the line .

The Hawkeyes were second in the league in scoring but prone to getting blown out when their shots weren’t falling. They had three losses of at least 20 points this season.

This one started down that path, too. The Hawkeyes missed eight of their first 10 shots, three of them from beneath the basket, and had four turnovers as Cincinnati pulled ahead 18-5. Cumberland had a layup and two assists during the spurt.

The Hawkeyes went to a zone defense that changed the pace, and Joe Wieskamp had a driving layup and a 3-pointer that helped the Hawkeyes close to 36-31 at the half. Bohannon’s long 3 — his only basket beyond the arc — gave Iowa a lead early in the second half, but Cumberland matched with his first 3-pointer to put Cincinnati ahead, setting a back-and-forth pace.

Wieskamp hit another 3-pointer during an 11-2 surge that put the Hawkeyes ahead to stay. He finished with 19 points.

Iowa had arguably its biggest win under McCaffery, topping an already successful season. The Hawkeyes have improved their win total from last year by nine games.

Cincinnati has dominated the AAC overall, but the Bearcats haven’t been able to make much of a dent in the NCAA Tournament.

The Bearcats are 46-14 all-time in the tournament. They haven’t advanced beyond the opening weekend since 2012, when they lost in the Sweet 16.

Bohannon’s one 3-pointer gave him 261 for his career, one behind Jeff Horner (262) for the school record.

The Bearcats hadn’t played in Columbus since 1924. Their football team and men’s basketball team are scheduled to play the Buckeyes in Columbus next season, the first time that’s happened since 1912. Cincinnati football coach Luke Fickell — a former Buckeyes coordinator — was cheered loudly when shown on the video board during a timeout.

The teams are scheduled to meet again on Dec. 21 at the United Center in Chicago.

Iowa faces the winner of the later game between second-seeded Tennessee and Colgate.