Jones holds off ex-JGR teammate Hamlin to win at Darlington 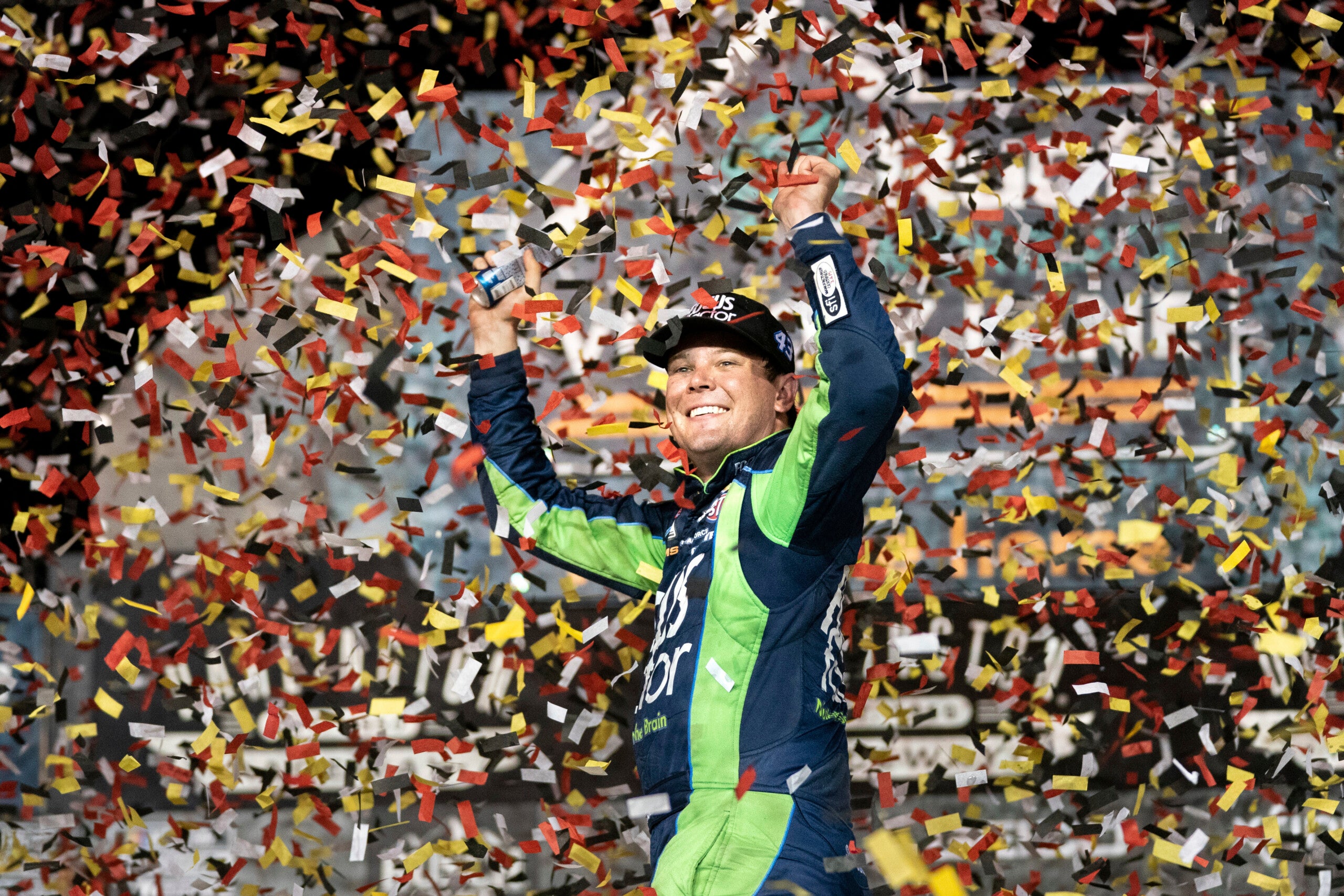 DARLINGTON, S.C. (AP) — Erik Jones gave the No. 43 car a landmark 200th victory — along with maybe a few regrets to his old employers at Joe Gibbs Racing.

Jones moved in front when JGR star Kyle Busch blew an engine, then outraced another former Gibbs colleague in Denny Hamlin over the final 31 laps to win the Southern 500 on Sunday night. It’s the first time a non-playoff driver won the opener of the 10-race postseason.

Jones won this event in 2019 for the Gibbs organization, where he raced Cup cars from 2017-20. He came out on top once more, this time for Petty GMS Motorsports owned in part by Richard Petty.

“I never lost any belief in myself through any of it,” Jones said. “I knew I could still do it and I knew we needed to grow the program to do it. And we have.”

The celebration continued for the Petty organization, which had not won since Aric Almirola’s Daytona 500 victory in 2014.

The King went to Twitter shortly after Jones took the checkered flag, “Congratulations to @Erik_Jones and the entire #43 team!!!!”

Jones just wanted the Hall of Famer to keep his promise.

Hamlin, seeded sixth in the playoffs, closed in on Jones’ back bumper on the final lap, but couldn’t make the winning pass.

“Erik just did a really great job,” Hamlin said. “Great day for Erik, a great day for our team.”

The third of Jones’ old JGR teammates, Martin Truex Jr. held a substantial lead over Busch when his No. 19 had power steering problems and went off to the garage.

Jones remained in control and in one piece while many of the favored playoff participants couldn’t do the same.

Along with the blow up of Busch, the 11th playoff seed, No. 9 seed Kevin Harvick saw his car catch fire in a scary scene. Harvick scrambled away from his stopped car to safety.

Top-seeded Chase Elliott was gone during the first stage, sliding into the wall, hitting Chase Briscoe as he tore up his suspension and was out of the race.

“It’s unfortunate circumstances,” Busch said. “We just had a great car and didn’t come out with anything to show for it. That’s what I hate about it.”

Logano moved into the points lead with William Byron second, Hamlin third and Christopher Bell, Jones’ replacement at JGR, in fourth. The four drivers below the 12-team cutoff line for the second round were Austin Cindric in 13th, followed by Austin Dillon, Chase Briscoe and Harvick in 16h.

CHASING PROBLEMS: Chase Elliott was out of the Southern 500 before it got to halfway. Elliott slid in turn one, then collected playoff participant Chase Briscoe. Elliott’s suspension was damaged. His crew could not fix it in the pits and took it to the garage.

Elliott finished 36th, last in the field. His plans going forward: “Run better than we did today.”

FIRE DRILL: The scariest incident came in the final stage when Harvick caught fire on lap 276 as he came down the front stretch. Harvick quickly pulled the car on the grass and jumped out of the car, running to safety.

Moments later during the caution brought out by Harvick, J.J. Yeley’s car headed into the pits on fire. That blaze, too, was extinguished.

Harvick said it’s another safety problem with the Next Gen car NASCAR must fix.

“What a disaster, man,” Harvick said. “No reason … here we are in the pits with a burned up car and we can’t finish the race during the playoffs” because of unreliable parts.

QB1: Coastal Carolina quarterback Grayson McCall at the track “Too Tough To Tame,” as NASCAR’s first college athlete to receive a name, image and likeness deal with Darlington Raceway. McCall did some promotional work for the track and even had his face on the side of Ryan Vargas’ No. 6 car in the Xfinity Series race here.

McCall was the NCAA record-setter in passing efficiency at 207.6 last season. He threw three TD passes and ran for a fourth as the Chants opened the season with a 38-28 victory over Army on Saturday night.

Round one of the playoffs continues at Kansas next Sunday. Kurt Busch, currently recovering from a concussion in a crash at Pocono, won the race there in May. He gave up his playoff spot because he has not been medically cleared to return to the track.