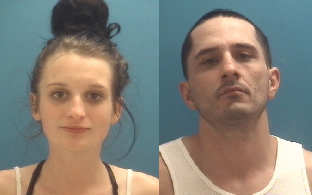 COLUMBUS, Ind. (WISH) – Two people were arrested after police say they led officers on a pursuit in a stolen vehicle.

According to the Columbus Police Department, an officer spotted a vehicle that had been recently reported stolen in Columbus on Sunday around 5 a.m. When the officer tried to pull over the black GMC Envoy, the driver sped off. Officers followed the vehicle from Columbus to Bartholomew County. Officers failed to deploy their tire deflation devises due to the high speed the suspects were driving.

After crashing, the suspects ran across the field in an attempt to flee from officers on foot. Alexi Ketchum, 18 of Columbus, and Jose Vera, 30 of Columbus, were eventually arrested. Officers used a K-9 to help track the two.

Vera was found hiding in Clifty Creek and refused to come out of the water. He was transported at Columbus Regional Hopsital for a dog bite and possible hypothermia and then he was transported to the Bartholomew County Jail.

Vera is charged with the following preliminary charges:

Ketchum is charged with the following preliminary charges: