4 in hospital after truck hits 2 houses on west side 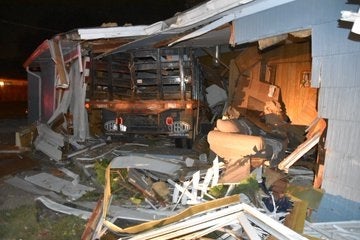 INDIANAPOLIS (WISH) – Four people are in the hospital after a truck slammed into two homes on the city’s west side.

According to the Indianapolis Fire Department, crews responded to the 4500 block of Patricia Street at approximately 1:45 Monday morning.

Witnesses told crews that after slamming into the homes, three occupants in the truck were spotted fleeing the scene.

All four people – three adults and one teen – were transported to Sidney & Lois Eskenazi Hospital in good condition.

Just before 4 a.m., teams were working to re-establish structural integrity to the houses after the truck went through the bedroom of one of the houses, narrowly missing a man sleeping.