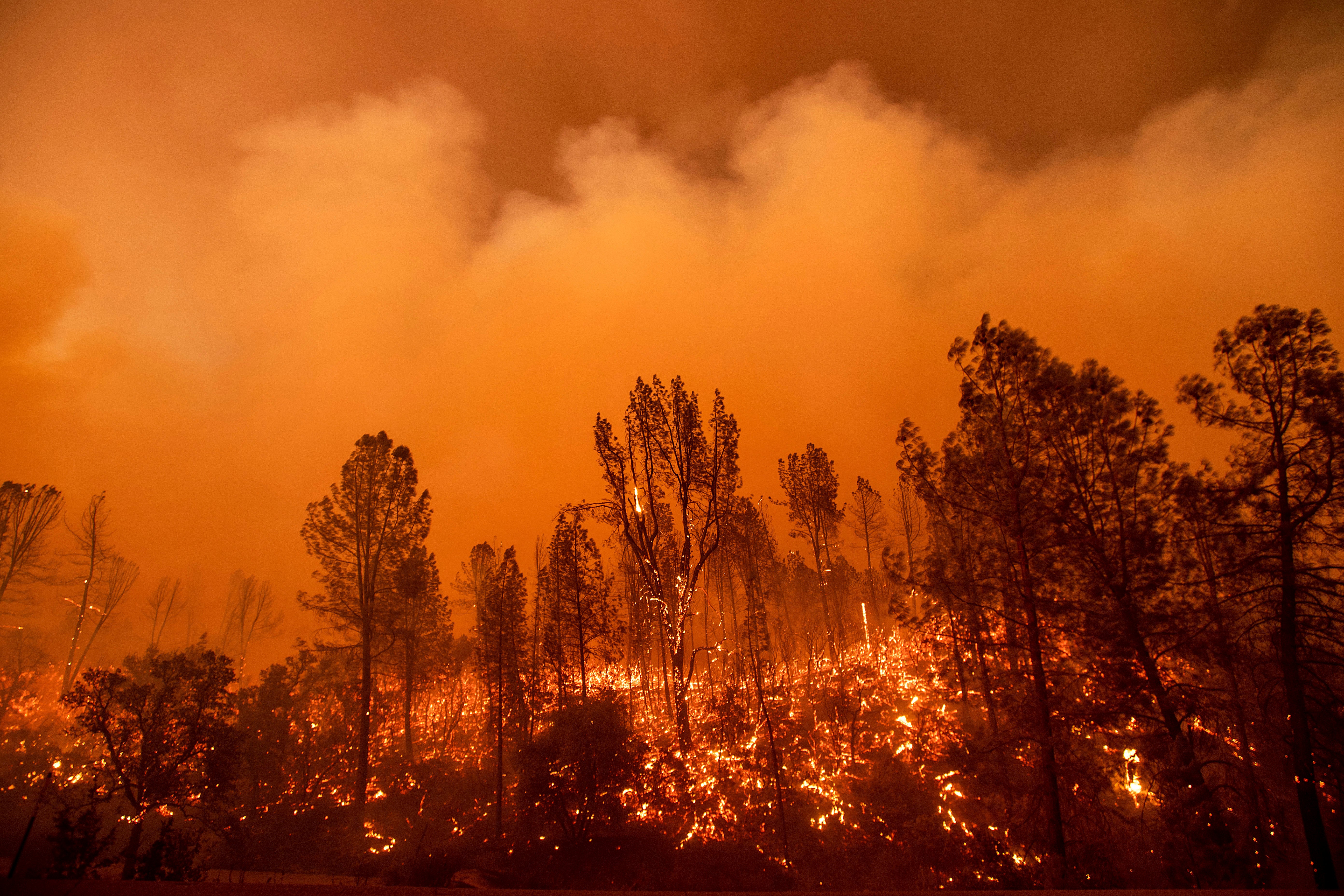 A fire official says an explosive wildfire in Northern California has killed a bulldozer operator as he fought to contain the blaze and injured three firefighters.

Cal Fire spokesman Scott McLean says the Carr Fire in Shasta County burned over the bulldozer operator, who was hired privately, and his equipment. He says the man’s body was found late Thursday.

McLean says three firefighters and an unknown number of civilians have burns but didn’t know the extent.

He says the fire is “taking everything down in its path.”

The blaze has burned dozens of homes in the communities of Shasta, Keswick and the west side of Redding, a city of about 92,000 people.

McLean says the situation is chaotic as Redding residents who had little warning try to evacuate.

An explosive wildfire in Northern California has burned dozens of homes, injured firefighters and civilians, and reached the city of Redding.

Scott McLean, a spokesman for the crews battling the Carr Fire, says the blaze is “taking everything down in its path.”

He says the fire has burned dozens of homes in the communities of Shasta, Keswick and the west side of Redding, a city of about 92,000 people.

McLean says the situation is “very dynamic” and that it’s “a heck of a fight.”

He says an unknown number of firefighters and civilians have burns but couldn’t elaborate. No deaths have been reported.

California authorities say a wildfire ripping through Shasta County in the north has grown Thursday after tripling in size overnight.

California Department of Forestry and Fire Protection officials say the fire that started in the Whiskeytown community is 45 square miles (115 square kilometers).

Officials say the fire is about 10 percent contained.

Whiskeytown was once a vibrant and bustling mining town.

A state parks official says employees worked through the night to save historic artifacts from a Northern California Gold Rush-era museum threatened by wildfire.

Teague says staff and volunteers were mindful of the brightening glow of the fire burning nearby in the hills above Redding.

Teague says they almost had to abandon rescue efforts just before dawn. But the fire changed direction and they were able to work another five hours to save valuable paintings and prints.

The museum in the restored 1861 courthouse is the centerpiece of the park that features remains and relics from Shasta City’s days as “Queen City” of Northern California mining.

California Gov. Jerry Brown has declared states of emergency in Riverside and Shasta counties as fires burn on both ends of the state.

The declarations issued Thursday state that hot temperatures, erratic wind and low humidity have increased the spread of both fires.

A wildfire in rural Shasta County in Northern California tripled in size overnight, and more evacuations have been ordered.

The declarations order the state’s Office of Emergency Services to provide aid to the counties.

A wildfire in a rural northern region of California has tripled in size overnight and more evacuations have been ordered.

The fire in Shasta County was estimated at more than 31 square miles (80 square kilometers) Thursday morning.

The hamlet of French Gulch that dates to the Gold Rush era was evacuated after a vehicle problem ignited the blaze on Monday.

California firefighters face another day of high temperatures as they try to contain a suspected arson wildfire that has forced evacuation of mountain communities and burned five homes east of Los Angeles.

The weather is calm Thursday morning in the San Jacinto Mountains where the fire broke out but forecasters say temperatures will remain above normal in the 90s to 100 with low relative humidity and that there could be gusty afternoon and evening winds.

The fire erupted Wednesday and rapidly spread over 7½ square miles (19 square kilometers), forcing the evacuation of the entire town of Idyllwild, other communities and youth summer camps.

A 32-year-old man is under arrest, booked on five counts of arson.

A wildfire authorities believe was sparked by arson has burned five homes and forced an entire forest town east of Los Angeles to evacuate.

The entire town of Idyllwild along with several nearby communities are under mandatory evacuation orders.

Authorities arrested a Temecula man on suspicion of setting the fire. It’s unclear whether he has an attorney.

To the north, at least one home burned in another fast-moving blaze in the San Francisco Bay Area.

In the Sierra Nevada, famed Yosemite National Park closed Wednesday as smoke from a fire to the west cast a pall on the region.