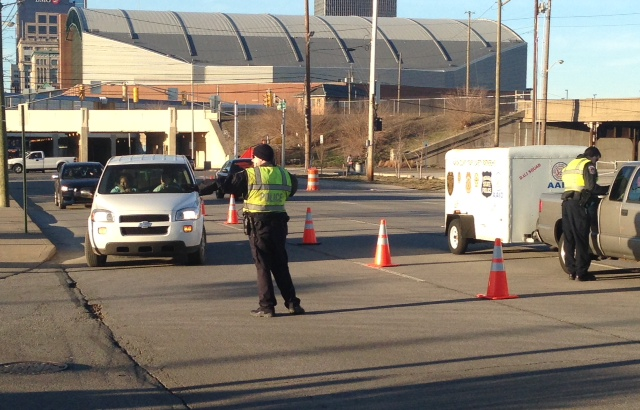 INDIANAPOLIS (WISH) – As St. Patrick’s Day party-goers headed home Tuesday night, police were out in full-force to make sure the drive home was a safe one.

“When it comes to drunk driving, this is a big big holiday,” said Sgt. Michael Duke if the Indianapolis Metropolitan Police Dept. “We would never go St. Patrick’s Day without putting extra patrols out.”

Officers from six law enforcement agencies including the Indianapolis Metropolitan Police Dept. stopped drivers as they passed to ask questions and check for impairment.

“It’s preventable and it’s avoidable,” said Lael Hill with the Indiana Chapter of Mothers Against Drunk Driving. “That’s why we strongly encourage people to plan ahead. Use Uber, Lyft, taxis or any other safe ride home. Just do not get into your car when you’re impaired.”

Hill said sobriety checkpoints are critical, not necessarily just to catch drunk drivers but to act as a deterrent as well.

“So people can say ‘hey, I want to plan ahead. I’m going to get a designated driver.There are cops out. I don’t want to get into trouble.’ And so it keeps the roads safe.”