Chrabascz gives No. 22 Butler lift in 68-65 win over Marquette 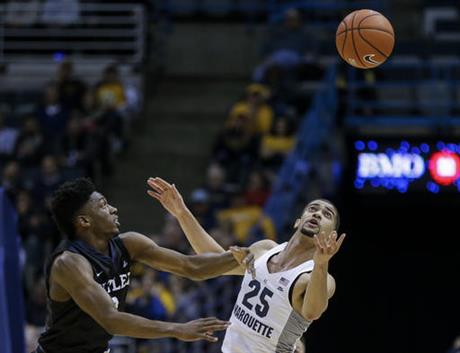 MILWAUKEE (AP) – Andrew Chrabascz scored 13 of his 21 points in the second half, Avery Woodson scored 17 points in his first start in more than three weeks and No. 22 Butler held off Marquette for a 68-65 victory Tuesday night.

The Bulldogs (19-5, 8-4 Big East) snapped a two-game losing streak after tweaking their starting lineup, with regulars Tyler Lewis and Kelan Martin coming off the bench. Kethan Savage joined Woodson in the starting lineup.

Chrabascz stayed in the starting five and gave his team a lift in the closing minutes. He followed two free throws with a layup with 49 seconds left to give Butler an eight-point lead.

Markus Howard had 19 points for Marquette (15-9, 6-6), including a 3 with 1 second left. But the Golden Eagles couldn’t force a turnover on the ensuing inbounds pass for one last shot.

The Golden Eagles fell short of knocking off a third straight top-25 opponent after getting back-to-back wins last month over Creighton and Villanova.

Martin (16.3 points) sat out the entire first half and did not enter until there was 15:35 left the second half. Asked why Martin was held out, a team spokesman said it was coach Chris Holtmann’s decision.

Martin finished with one point and missed all three of his field goal attempts.

Butler: The Bulldogs have never had a three-game losing streak during Holtmann’s three years on the bench. They took a 40-33 lead at halftime behind 15 points in the first half from Woodson before struggling with the ball for stretches of the second half. In the end, Butler got the kind of bounce-back win that Holtmann was looking for following a seven-day layoff.

Marquette: The Golden Eagles were ninth in the 10-team Big East in field goal defense entering the game (45.3 percent). But defense helped Marquette get back into the game after trailing by 11 late in the first half. Marquette played more aggressively on the perimeter in the second half after Butler was 7 of 13 from beyond the 3-point arc before halftime, holding the Bulldogs without a field goal for a 5-minute stretch at one point.

Butler: Finishes a two-game road swing with a trip to Providence on Saturday.

Marquette: Tries to sweep the season series against Georgetown during a visit to Washington on Saturday.