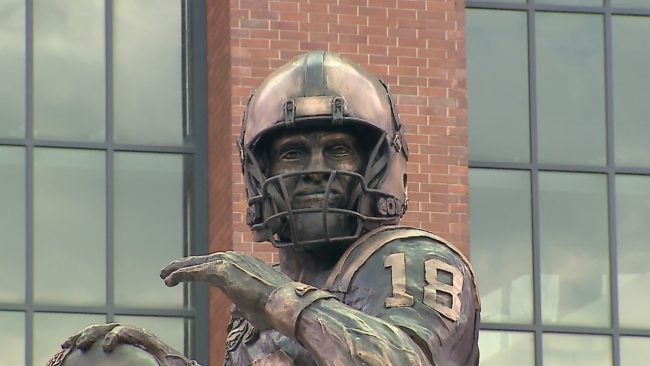 INDIANAPOLIS (WISH) — “And as I told the world a year and a half ago, I will always be a Colt. Thank you very much, God bless you,” said Peyton Manning.

After months and months of planning, some of the biggest names in sports and entertainment came together to honor the man who made Indiana a football state.

“I’m here for two reasons. One, I’m from Indiana. Two, whether he knows it, whether he wants it, I’m friends with Peyton Manning,” said David Letterman. “You can’t not be friends with this guy.”

“In his 18 seasons, you know what Peyton delivered,” said Roger Goodell. “No one has ever represented the game or the league with more class than Peyton Manning.”

“So when people ask me what makes him great, I tell them it’s that kind of attitude,” said Tony Dungy. “Yes, I want the team to be good. But whatever I can do to help somebody play better, that’s what I’m going to do,” Dungy said, recounting Manning’s approach to his teammates.

After nearly a year and a half of planning and sculpting, the statue finally stands outside of Lucas Oil Stadium. That’s great and all for Peyton Manning, but what means the most to No. 18 are the fans that all showed up early Saturday morning.

“It’s hard to really express how grateful I am for the fan support of my entire career here. They were a part of this journey, they were right there with us through the good times, through the tough times. They were always there,” said Manning.

And for the fans, No. 18 means much more than he will ever know.

A permanent reminder now stands tall outside of Lucas Oil Stadium.  This is the house that Peyton built.