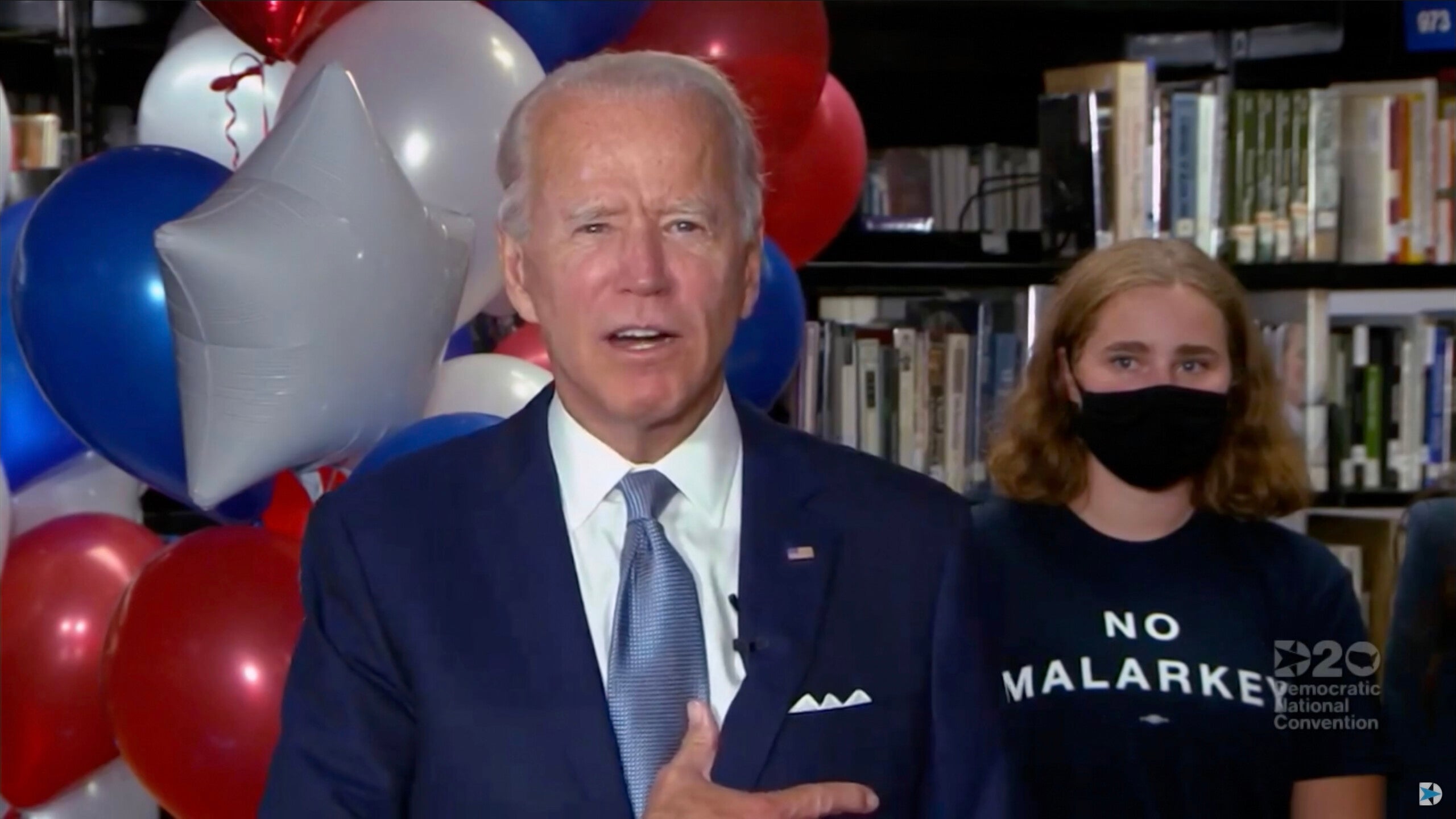 (CNN) — Democrats highlighted the vast diversity of their party and the country during the virtual roll call vote as they formally nominated Joe Biden for president Tuesday night, as average Americans from across the nation explained by they were backing the former vice president.

The event, which would normally take place in a crowded convention hall with delegates from each state cheering in their designated section under their state’s pole, instead unfolded in videos and appearances where delegates, union members and health care workers spoke a few words from exotic locales and landmarks in their states. Democrats from the Northern Mariana Islands for example wore festive flowered garlands while others from urban areas spoke in front of colorful murals.

The linguistic diversity of the party and country were on display, as Spanish and multiple Native languages were heard throughout the roll call. In a call back to the usual recognition of unique foods and landmarks in each state during past convention floor roll calls, a restaurant worker from Rhode Island held out a plate of fried calamari. Speakers included activists and elected officials, as well as an Alaska fisherman, a Kansas farmer and a Missouri bricklayer.

Biden accepted the nomination from the library at Brandywine High School where his wife Jill Biden will speak later on Tuesday. While there was no balloon drop, his grandchildren burst into the room with the pop of brightly colored streamers.

“Thank you very, very much from the bottom of my heart,” Biden said in a very brief remarks before putting his mask back on. “Thank you all. It means the world to me and my family and I’ll see you on Thursday.”

While Biden’s name was never far from the lips of the Democratic speakers, Trump’s time in office was fully under the microscope in the night’s opening stages. With the night’s programming centered on the theme “leadership matters,” the keynote speech took an unusual format featuring 17 rising stars in the Democratic Party.

“This year’s choice could not be more clear. America faces a triple threat — a public health catastrophe, an economic collapse and a reckoning with racial justice and inequality,” said Stacey Abrams, a former gubernatorial candidate in Georgia who is seen as one of the young stars of the party. “So our choice is clear, a steady experienced public servant who can lead us out of this crisis just like he’s done before. Or a man who only knows how to deny and distract. A leader who cares about our families or a president who only cares about himself.”

“In a democracy, we do not elect saviors, we cast our ballots for those who see our struggles and pledge to serve,” she added.

Jill Biden has long served as a supporting player to her husband’s political career, but she commanded the spotlight as the headliner on Tuesday during the second night of the Democratic National Convention.

Her speech highlighted the personal side of former Vice President Joe Biden as a loving father who pulled his family back together after the death of his first wife, Neilia, and 1-year-old daughter Naomi in a car accident in 1972. She also spoke to the other great tragedy of Biden’s life: the death of his son Beau Biden, a former Delaware attorney general, from brain cancer in 2015 when Biden was serving as vice president.

“How do you make a broken family whole? The same way you make a nation whole: with love and understanding, and with small acts of compassion; with bravery; with unwavering faith,” Jill Biden said.

“There are times when I couldn’t imagine how he did it — how he put one foot in front of the other and kept going,” she said. “But I’ve always understood why he did it. … He does it for you.”

The former second lady spoke as a teacher, delivering her speech from Brandywine High School in Wilmington, Delaware, where she taught English. She spoke to the difficulties and uncertainties that many parents are facing as they decide whether to send their children back to school in the middle of a pandemic.

“You can hear the anxiety that echoes down empty hallways,” she said. “There’s no scent of new notebooks or freshly waxed floors. The rooms are dark and the bright young faces that should fill them are confined to boxes on a computer screen.”

While her husband was vice president, Jill Biden continued to teach English full time at a community college in Virginia. She earned her doctorate in education from the University of Delaware in 2007.

Former President Bill Clinton’s centrism might be out of step with his party’s leftward march. But he showed the pithy, explanatory political skills that made him a two-term White House resident and helped reelect Barack Obama in lacerating Trump’s performance in the pandemic.

“At first he said the virus was under control and would soon disappear. When it didn’t, he was on TV every day bragging on what a great job he was doing, while our scientists waited to give us vital information. When he didn’t like the expert advice he was given, he ignored it,” Clinton said in a video recorded in his living room in Chappaqua, New York.

“Only when COVID exploded in even more states did he encourage people to wear masks. By then many more were dying. When asked about the surge in deaths, he shrugged and said, ‘It is what it is.’ But did it have to be this way? No.”

Clinton has been a star performer at Democratic conventions since the 1980s but only got around five minutes for his video speech boosting Biden this year. Targeting undecided voters, Clinton said, “If you want a president who defines the job as spending hours a day watching TV and zapping people on social media, (Trump’s) your man. Denying, distracting, and demeaning works great if you’re trying to entertain or inflame. But in a real crisis, it collapses like a house of cards.”

“You know what Donald Trump will do with four more years: blame, bully, and belittle. And you know what Joe Biden will do: build back better.”

The 42nd President’s policies on welfare and crime are now frowned upon by many progressives, represented at the convention on Tuesday night by Rep. Alexandria Ocasio-Cortez of New York. And the #MeToo era has cast his affair with White House intern Monica Lewinsky in an even more dubious light.

Yet he still remains one of the party’s most bankable names.

Another one of those bankable names, one who is still up and coming in the party, made her first appearance at a Democratic convention Tuesday.

Ocasio-Cortez, a longtime supporter of Vermont Sen. Bernie Sanders, was one of several Democrats who nominated Sanders before the virtual roll call at the convention on Tuesday night. Since Sanders dropped out, many Democrats have looked to her to serve as a bridge between the progressive wing of the party and the moderate wing after the long, protracted primary fight. Ocasio-Cortez served as a co-chair of a climate change task force — one of several unity commissions the two teams formed to try to unite the party.

During a 95-second address, she highlighted the issues that Sanders championed.

“In a time when millions of people in the United States are looking for deep systemic solutions to our crises of mass evictions, unemployment, and lack of health care, and​ espíritu del pueblo and out of a love for all people,” she said, “I hereby second the nomination of Senator Bernard Sanders of Vermont for president of the United States of America.”

The evening will also feature a video about the cross-party friendship between Biden and late Sen. John McCain, narrated by the Arizona Republican’s widow, Cindy, a senior Democratic official told CNN.

The Senate veterans once traded barbs on foreign policy but bonded across party lines in a friendship dating to when McCain served as a military aide after returning from years as a prisoner in the Vietnam War.

The former vice president delivered a powerful eulogy for his friend at his memorial service after he died of brain cancer in 2018.

“My name is Joe Biden. I’m a Democrat. And I love John McCain,” he said.

The video, entitled “An Unlikely Friendship,” may trigger President Donald Trump, who long feuded with McCain and still brings up his thumbs-down vote three years ago that scuppered a Republican attempt to repeal Obamacare.

Another prominent Republican — former Secretary of State Colin Powell, who served under President George W. Bush — offered a video testimonial about Biden during Tuesday night’s program as part of the Democrats’ effort to draw in Republicans and independents who are frustrated with Trump’s leadership and his divisive tactics.

Though Powell, who was also chairman of the Joint Chiefs of Staff under President George H.W. Bush, served under Republican administrations, he has voted for Democrats in the three most recent presidential elections.

In his video message, Powell said that America needs a commander in chief who will take care of US troops the same way that he would take care of his own family.

“For Joe Biden that doesn’t need teaching, it comes from the experience he shares with millions of military families sending his beloved son off to war and praying to God he would come home safe,” Powell said.

Entering the conventions, Biden was leading Trump 51% to 42% nationally, according to a CNN Poll of Polls on the general election matchup. But a CNN poll conducted by SSRS released Sunday showed a tighter race, with Biden at 50% and Trump at 46%.

One reason why Trump’s standing had improved in the CNN poll released Sunday was that he had solidified his support among more conservative voters. Back in June, 8% of Republican or Republican-leaning independents said they would back Biden — but in the new poll only 4% planned to support the former vice president.

The poll showed an opportunity for Democrats in the final months, however, because Trump’s voters were more likely to say they could change their minds (12% said they could) than Biden’s (only 7% said so).