Exterminator: Dogs were living with thousands of rats in Owen County 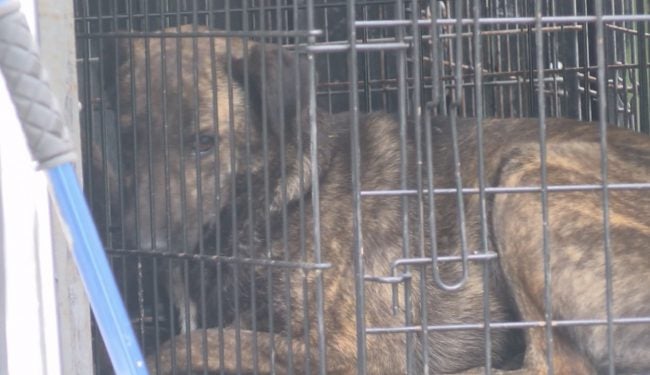 FREEDOM, Ind. (WISH) – Authorities removed the last of more than 70 dogs Friday from a property where they were living in deplorable conditions, according to Owen County Sheriff Leonard Hobbs.

Officials said the property was infested with thousands of rats.

Humane Society workers said the dogs are suffering from fleas, ticks and other skin issues. One dog has tumors on his paws and might need some toes removed.

Officials estimate more than 90 percent of the dogs were malnourished. All of them are still alive and being treated.

“They were just living in filth,” Sheriff Hobbs said. “You see stuff like this on TV but when you’re first hand looking at it, it takes you back. It kind of takes your breath away a little bit.”

The sheriff said someone called his office to complain about rats on their property. When investigators responded, they found the dogs.

Authorities started seizing the dogs after a judge issued a court order Tuesday.

Hobbs said Paul Purcell is the homeowner. He helped officials remove the dogs but didn’t want to talk to reporters.

Greg Parker is an exterminator tasked with clearing out the rats. He estimates there are about 100,000 rats on the property. Parker’s goal is to remove all the rats within a month.

“I would rather live in a cave,” Parker said. “I mean it’s pretty much like a cave.”

The Owen County Humane Society reached out to other shelters for help caring for and housing the dogs. They’re also seeking donations to help cover the costs.

Angel Animal Hospital in Greenwood turned to Facebook to show their support.

Officials haven’t announced whether the homeowner will be charged.