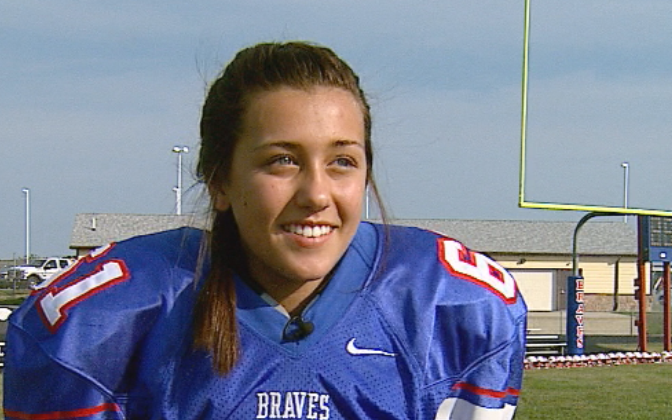 JOHNSON COUNTY, Ind. (WISH) — A sophomore at Indian Creek high school in Trafalgar is breaking barriers one kick at a time.

Claire Skillman is the first female player to suit up for the school’s football team.

She wears number 61, and she’s not as big as the other players.

But Claire Skillman does what a lot of other players can’t do.

She kicks, and she’s darn good at it.

“I haven’t had anyone say they don’t agree with what I’m doing. Everyone has been so supportive,” said Skillman. “It’s awesome because I’ve been able to meet so many new people from this experience.”

A soccer player at heart, she originally came out to be a team manager.

“During practice one day, I was messing around and I kicked a few field goals. And Coach Gillin, our main coach, asked me to bring my cleats to the next practice,” she added.

It was the first time in 37 years of coaching that Mike Gillin put a girl on his team.

“We needed some depth and she’s the most consistent kicker we have, so her gender doesn’t mean a thing to me,” Coach Gillin said.

“Some boy kickers can’t even do that. She’s a girl and she did it, very impressive,” Mahan said.

She was a bundle of nerves before her first home game against rival Greenwood High School.

“Everyone will be watching me, but hopefully I’ll do well,” Skillman added.

Greenwood won the game but Skillman was 3/3 on extra point kicks in the home opener against Greenwood.

That’s makes her a perfect 8-for-8 on the season.