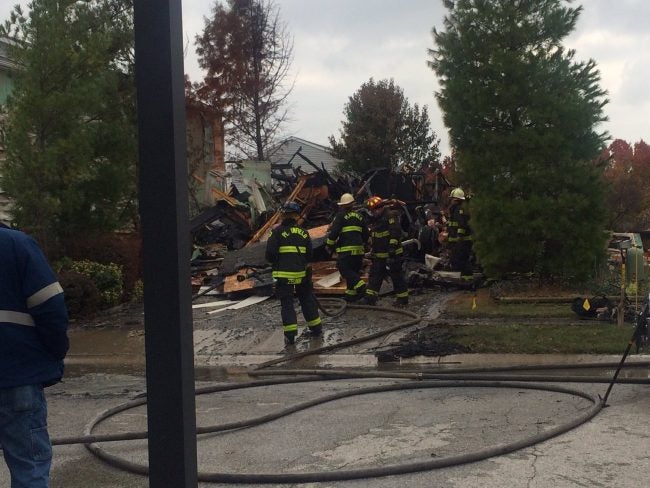 CAMBY, Ind. (WISH)–Investigators are trying to figure out what caused a house fire late Monday morning in Camby after neighbors reported hearing explosions.

No people reported injuries, but firefighters say at least one pet died in the fire on Walnut Grove.

People in the neighborhood praised firefighters for containing the fire, which severely damaged one home and caused damage to the siding of two others.

Investigators said there was a gas leak nearby, but they don’t know if that caused the fire.

Justin Pettet and Emily Buis said they were both asleep when they heard the explosion from a home across the street.

“Really, it sounded like a big car wreck,” Pettet said.

“We thought something fell in the house or something,” Buis said.

Buis said she ran outside and watched the garage door explode on the home. The fire sent five fire agencies to the neighborhood.

“I was just hoping there was nobody in the house,” Buis said.

Firefighters said no people were in the home at the time of the fire. People were sorting through photographs outside the home Monday, trying to salvage whatever was left.

Investigators said they’re working with Vectren Energy Delivery and people in the neighborhood to determine the cause, which could take days.

“We’re getting some statements from people that maybe there was a company knocking on the door as to some work that might have been conducted. We have not identified them, nor did we see anyone on the scene when we arrived,” Plainfield Fire Territory Chief Joel Thacker said.

Firefighters said one dog died in the fire.

The gas leak, according to firefighters, has now been stopped.