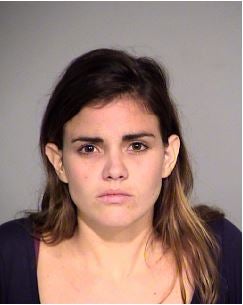 Officials say a woman became “unruly” during American Airlines flight 1284 from Miami to Chicago O’Hare Airport. She was restrained and moved to the back of the plane.

As she was being moved, she struck a flight attendant and a passenger, according to officials.

Airport police boarded the plane and took the woman into custody. During the arrest, officials say, she kicked an airport police officer.

According to a police report, 25-year-old Daniela Velez-Reyes was arrested on preliminary charges of weapons at an airport, disorderly conduct, battery on public safety official with injury, criminal recklessness and resisting law enforcement.

“I was the most scared I’ve probably every been in my life because you don’t know what’s happening, and they don’t tell you anything,” explained Jim Saviano, who spoke to 24-Hour News 8 after tweeting a video of the woman being taken off the plane.

The flight resumed after about a 90 minute delay, officials say.

“You just sense urgency,” Saviano added. “And then when I saw us descending really fast, it felt like… wow, something really bad is going on, because for us to have to start going down right away really quickly — you know, you imagine something is really, really wrong.”

Video posted to Twitter by Brian Salvi shows the woman being escorted off the plane.

When someone has a Bridesmaid moment on your plane and you need to make an emergency landing. #bummed #callmom pic.twitter.com/FZFrztxOlw– Brian Salvi (@B_Salvi) September 14, 2015