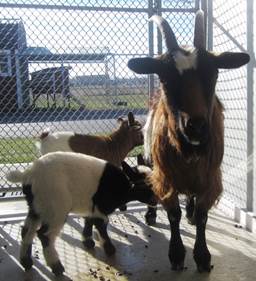 Authorities believe the three goats got out of their home and ended up running across some major streets in Franklin.

The animals survived and now the animal shelter is looking for their owners.

Just a few months ago the department began a “large animal rescue team” which has already been put into action.

“We had some good laughs of ‘you’re looking for a what?'” Johnson Co. Humane Law Enforcement Major Bob Golinski said.

“Well in my 11 years, this is a first,” Johnson Co. Animal Control Director Michael Delp said.

They had one of the most unusual chases in department history Monday.

“We got a call yesterday about two baby goats running at large in Franklin, the east side of Franklin,” Delp said.

The first officers responded to Highway 44 near I-65.

“And then we got another call about a mother goat, mama goat, running at large,” Delp said.

Then the mother took off, heading west.

She was finally corralled with an ATV and snow fence in the Tractor Supply parking lot.

“After about six to seven hours of following the mama goat all over Franklin, one my officers was able to capture her and bring her back to the shelter and reunite her with her two babies,” Delp said.

Now Delp said the search for their owner has begun.

“The shelter is not the place she needs to be, she needs to be back home in a barn and that’s another reason we really want to reunite her with owners,” he said.

If you know who owns those goats, you’re asked to contact Johnson County Animal Control at 317-736-3924.