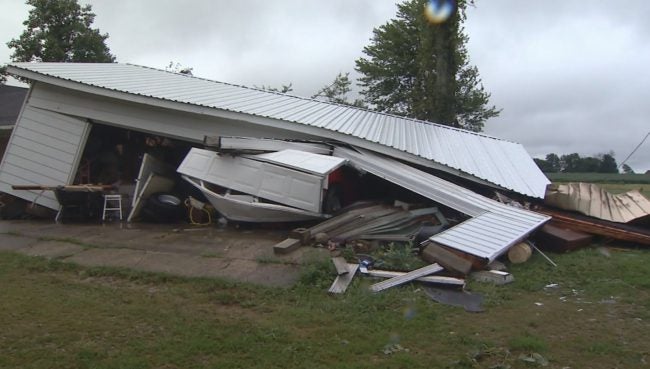 HENDRICKS COUNTY,Ind. (WISH) – On 600 East in Hendricks County nearly every home on the street had some sort of damage.

“We always felt like we were safe because we’re down in the valley here. We thought it would go over us,” said Helen Scmutte, who lost ten trees.

But on Monday, a tornado swept right through their street, in a matter of seconds.

“We were just very blessed that it just came and went that fast,” said Barbara Alexander, who also lives on the street.

However, that was not without leaving behind a trail of snapped branches, downed power lanes, and ripped off siding.

“We were blessed that it didn’t stay any longer because we have nail pops on our walls where suction pressure in the house was trying to take the roof off I believe,” said Alexander.

In Clayton, just southwest of Avon, is where it’s believed the tornado first touched down, skipping through a soy bean field, toppling a 30-foot trailer and taking out a garage. A man and his mom were in the garage when the storm came through. They were not injured, and the main house wasn’t damaged.

The storm system eventually made its way up to Howard County and there are no reports of injuries or fatalities.