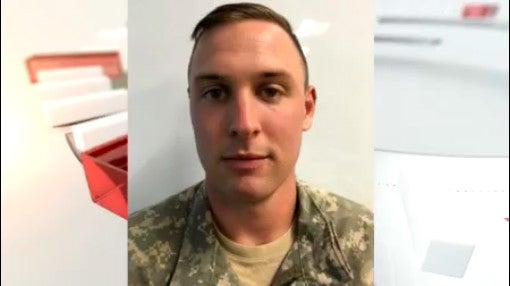 BICKNELL, Ind. (WTWO) — Folks in Knox County are remembering a local man, killed in the line of duty.

Army 1st Lt. Clay Cullen, 25, was one of two soldiers killed when his helicopter crashed. Cullen was based in Colorado, but the crash happened during a Saturday training mission in California.

Folks who knew Cullen spoke Tuesday of a caring young man who loved his country.

“He was always smiling,” Aaron Hall said. “I mean I can just see that smile on his face right now.”

Walking around North Knox High School, it’s easy to spot Cullen. Awards and achievements of the dedicated athlete and scholar still hang with pride on the walls.

Halls Tuesday were silent as students and faculty mourned the loss of one of their own.

“It’s a cliché to say someone was doing what they loved, but he really was,” John McClure said.

History teacher John McClure said he stayed in touch with Cullen after graduation.

“I was really impressed what he had achieved,” McClure said. “He wasn’t the kind to brag on himself or he wasn’t the self-promoting type of person. He just worked hard and achieved what he wanted to.”

After graduating from North Knox, Cullen went on to college at Indiana University, where he joined the ROTC program. After graduating, he went on active duty in the military.

No matter where he went, though, friends said, Cullen never forgot where he came from.

“He was a man of honor,” Krisiti Utt said. “He was a man that loved his country, that loved God. I have no doubt that he’s looking down on everyone with that smile on his face.”

On Tuesday, the student body wore red, white and blue to honor Clay Cullen, and the flag outside the school was flying at half staff.