A veggie tale: Semi carrying broccoli flips on I-69 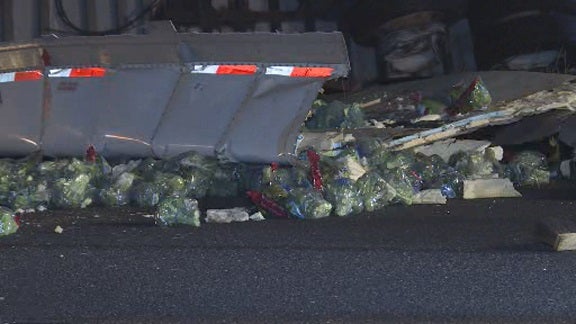 The crash was reported around 1:15 a.m. Wednesday about two miles south of I-469 in southwestern Allen County near mile marker 294.

About three hours later, all lanes were reopened for traffic. Crews are heading back during the daylight to haul away the semi-truck.Wrecker crews pulled the semi into the median, cleaned up some of the broccoli and opened the left lane to traffic around 2:30 a.m.

Delays on the interstate stretched for nearly two miles.

Police haven’t said why the driver crashed, but he was not hurt.

The crash comes within a 48-hour span in northeastern Indiana that saw multiple crashes involving semis.

The driver of a semi crashed onto the top of another semi on U.S. 30 in Whitley County Tuesday morning. The driver told police he fell asleep at the wheel. Another crash in Steuben County happened Tuesday evening when a semi drifted to the right and crashed into a semi that was parked along I-69.

A crash Monday saw a tractor-trailer make a wide turn on a downtown Fort Wayne street and crush a car. Also on Monday, a crash between a semi and car in Wells County killed one person.