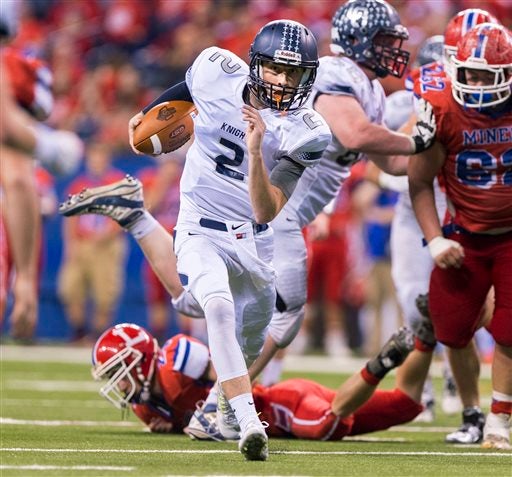 INDIANAPOLIS (AP) – Lafayette Central Catholic had its way with Indiana Class 1A football from 2009-2012, earning four consecutive state titles that propelled the Knights up to Class 2A the past two seasons due to the IHSAA Tournament Success Factor.

Back in Class 1A this year, the No.1 ranked Knights, picked right up where they left off with another state championship with a 34-7 victory over the No. 3 Linton-Stockton Miners at Lucas Oil Stadium on Friday.

“It’s the kids and 2A last year really taught us a lot,” Central Catholic coach Kevin O’Shea said of the Knights’ success.

Central Catholic (15-0) has now won five consecutive Class 1A titles in which it was eligible to play in and improves to 7-0 in state finals appearances.

Avery Denhart threw for 193 yards and a touchdown, Jackson Anthrop had 176 total yards and Brandon Yeagy had three rushing touchdowns to lead the Knights’ offense.

Sam Milazzo added a pair of field goals, tying a Class 1A record, to round out the Knights’ scoring.

Central Catholic jumped out to a 7-0 lead at Lucas Oil Stadium Friday on a 63-yard touchdown pass from Denhart to a wide-open Luke Fusiek in the first quarter. The lead grew to 17-0 after Yeagy’s first score of the day from 3-yards out and Milazzo’s 25-yard field goal.

“Starting out quick was huge,” Anthrop said. “It was big getting that first punch and getting a lead.”

Linton-Stockton’s lone score came late in the first half when, aided by three Central Catholic penalties, Jacob Clothier hauled in a 7-yard touchdown pass from Tyler Meurer to cut the Knights’ lead to 17-7 at halftime.

The Miners (13-2), playing in their first state football finals, struggled offensively. The normally high-powered attack was held to just 168 yards after averaging 524.

Mitchell Eberhardt led the Miner’s ground game with 43 yards on nine carries, while Meurer ran for 39 yards and threw for 54 with a touchdown.

Central Catholic was able to pull away in the second half by holding the Miners to just 52 second-half yards, while the Knights’ offense racked up 193 and 17 unanswered points.

“I thought in the second half we were able to run the ball more successfully,” O’Shea said. “Our offensive line really took things over late in the third quarter and we wore them down in the fourth quarter.”