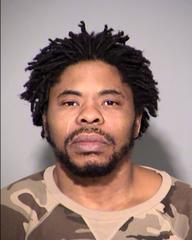 Detectives were dispatched to the scene to investigate, because this would be a violation of Howard’s parole.

A search warrant was obtained and detectives found a 9MM rifle, handgun ammunition and narcotics.

Howard was arrested and preliminary charged with possession of a firearm by a serious felon, cocaine, a synthetic drug and marijuana.